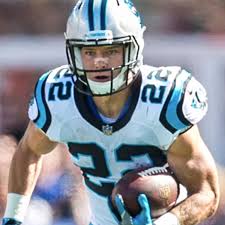 We are entering the final week of my rankings extravaganza! Running back is my favorite position to speculate on and the position that I usually lean on in the first round of drafts. I always find myself wanting to build my fantasy teams around a running back that is going to be one of the league leaders in touches. Running back can get thin pretty early and drafts and the later round guys tend to be speculation picks. So here are the top guys to target.

The end of July is near and that means the end of Rudy Gamble’s special pricing for NFL Roto Deluxe tools is almost here. Get the best value in the industry today!

I’d love to rank Alvin Kamara #1 overall because I truly want all of the Alvin Kamara shares but Christian McCaffrey was the highest scoring PPR running back in 2018 and seems to have a leg up on the competition going into 2019. McCaffrey averaged 122.8 ypg and had ranked 4th in red zone touches with 60. There is no competition for touches. McCaffrey had a 94.5% snap share which ranked first among running backs. McCaffrey looks to have taken it to the next level in the weight room and he looks like a wrecking ball. 2019 should be another elite year for McCaffrey.

I think that Alvin Kamara has the upside to have a historic fantasy season. I wrote about him here.

Saquon Barkley is an absolute workhorse and has a good shot at finishing as the number one overall player but things are getting pretty ugly in New York in the first week of training camp. This isn’t a drastic drop considering that there is so much talent at the top of the draft board but getting in the red zone could be an issue for New York. Barkley will have a ton of touches in the running and passing game and there is a chance that Shepherd is ready for week one and Tate could get his suspension overturned but this is where I’m going to keep Barkley for now because defenses can almost solely focus on stopping him and Engram.

Elliott is another one of these backs that you can’t argue if he went #1 or #2 overall. I’m not looking to make a splash here and piss off Cowboy fans. The red zone production from last season left a lot to be desired. Elliott averaged more total yards per game than McCaffrey last season, I mean he carried the ball 304 damn times. Who knows how long his hold out will last, but it would be in the Cowboy’s best interest to make Elliott happy as soon as possible.

As bad as DJ was last season, he still finished as the RB9 in PPR leagues. David Johnson ranked 15th in red zone touches last season and there is hope with the new offense that his opportunities could increase inside the 20. If the new faces in Arizona do not develop fast enough DJ is versatile enough to take snaps in the slot.

James Conner finished as the PPR RB6 in just 12 games last year and it seems like a great place to rank him for 2019. I don’t look at him as an injury risk and despite the GM’s comments earlier in the off season about a possible running back by committee, that isn’t the way that Mike Tomlin rolls. James Conner is an elite tackle breaker and is helpful in the passing game. There is a lot of competition at the running back position, but Conner is a guy that I am definitely targeting.

Le’Veon missed last season and that could be very good for his health going forward. Who doesn’t need a year long vacation to get right: mind, body, and soul. Unfortunately, he took the money that New York was offering and it might not be the right offense for him, even if he says that he’s ready for 500 touches if needed. Unfortunately, Adam Gase’s slow pace and poor RB usage will only allow for half of that.

Joe Mixon finished as the RB10 last year and as this offensive line gets better, Joe Mixon should as well. This offense may lean on Mixon even more during the beginning of the season without A.J. Green at the start.

Dalvin Cook has the ability to be THE RB1 any given year but his injury history lingers over his head. Mike Zimmer is going to build Minnesota’s offense around Dalvin Cook and Cook was on the field for 72% of the snaps last year and that should only go up if he is healthy.

Aaron Jones is finally going to get a chance to be a 3-down back in Green Bay in an offense that is going to use him. Aaron Jones should be a top 10 running back this year. There is nothing holding him back anymore. Jones is definitely a player that I am targeting in the late 2nd round or early 3rd round.

Gone are the days that Todd Gurley is a workhorse back. But that is okay because Gurley is going to be used heavily in the red zone and Los Angeles is going to keep that knee as fresh as possible. He isn’t going to compete for the overall RB1 anymore but he still can be a RB1 for 12 team leagues.

DAMIEN WILLIAMS IS THE STARTING RUNNING BACK FOR THE MOST PRODUCTIVE OFFENSE IN FOOTBALL. Damien Williams is going to have a good season even though he hasn’t taken on a full workload in his career. He was fantastic for Kansas City at the end of 2018 and has Andy Reid’s full confidence going forward. He left practice early with hamstring issues yesterday but I don’t foresee it affecting his fantasy stock.

Nick Chubb had a great year in 2018 once Carlos Hyde was traded. Chubb finished 10th in the league in rushing yards in a little over a half of a season in starting running back work. I’m a big fan of all facets of this Cleveland Browns offense and I don’t think that Kareem Hunt will be a big factor in this offense after he returns from suspension.

Melvin Gordon is obviously better than that 14th running back when he is on the field, but unfortunately we don’t know when he is going to play again.

The Lions letting Theo Riddick go was very beneficial for Kerryon Johnson, especially in the PPR format. Johnson should be more involved in the passing game and is a good draft value at the moment. As long as Johnson stays healthy, he will finish close to an RB1 in all formats in an offense that will rely heavily on him.

Should i trade my 2nd rd 9th pick in my 16 team dynasty/keeper league (keep 4 lost next best player for 2 rds) for Eric Ebron? I do not have a 1st or 3rd rd pick

Even with the expected regression I think that’s a pretty good value. I’d do it.

Keepers in Auction. We keep 2 drafted player $5 more each year. $200 roster. Keep 2 from this group.

David Johnson and Travis Kelce is a great start

Things could of course change with injuries and such, but in a standard 12-team league (no PPR) I can keep up to 2 (otherwise I get the draft pick that round). From last year I have McCaffery, Gordon, TY Hilton, and Brady as probably the only options. McCaffery is the obvious keep, but would you keep a second out of this or take the 2nd round draft pick? Gordon scares me, Brady seems silly…so probably TY?

I would honestly just keep McCaffrey and throw the rest back. If Gordon signs I would keep him as well obviously

That’s about what I was thinking. The draft is somewhere in late August, so I have a lot of time to decide. Thanks.

Coming back to the well after your last week advice last year got me over the hump to my first ‘ship. I have to keep two of the following (Round kept in brackets). I’m currently leaning to one of Cooper/Thielen & Michel (the latter purely for value) – non-PPR:

Excellent to hear, and congrats!