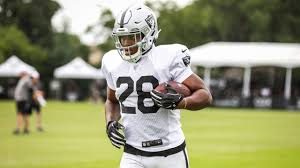 Once you get past the top 15, it is a mixed bag when it comes to running backs. There is no doubt that there is a lot of talent here and also a lot of opportunity. But, you and I both know that injuries, performance issues, and better performance by teammates will affect a handful of backs in this group. But, I have to do the best that I can to forecast these outcomes with the information that I have on hand.

James White is a cheat code in PPR leagues and he’s always under drafted. Last season, White finished as the RB8 in PPR formats which is a pretty solid RB1 in 12 team leagues that owners didn’t pay an RB1 price for in drafts. The concern this season lies in the fashion that he finished the 2018 season after such a strong start.

Devonta Freeman gets to hit the reset button on another season and try to stay healthy for this one. He is currently not worth a draft pick for me unless I am handcuffing him with Ito Smith. In 2016 he averaged 4.8 yards per carry and had a 1,000 yard rushing season and without Tevin Coleman in Atlanta anymore we will have to see if those numbers are still in the cards.

Leonard Fournette has all of the talent in the world to be an RB1 but the question remains whether he has the drive and offense to do it in. After busting off a couple of big runs in his rookie season that inflated his numbers, he ended an injury shortened 2018 with 3.3 yards per carry.

Marlon Mack, or “fish pimp” as I will now call him might actually be a pretty good running back. He finished as the RB23 in PPR leagues in 11 games last season and had some pretty solid performances. He also had a few DUDS and was only targeted 26 times last season in the passing game.

Tarik Cohen finished just outside of RB1 territory in 12 team leagues with a RB13 finish. He ranked 6th in RB receiving targets with 89 and 3rd in receiving yards for a running back with 725. My concern is that the additions of David Montgomery and Mike David could potentially cut into his snaps.

Derrick Henry was a complete bum until the fantasy playoffs and then that ridiculous 99.9999 yard run happened and he turned it on from there. Derrick finished as the PPR RB16 in 2018, but I expect Dion Lewis to get his footing and become a big part of this offense. I’m not going to let the last few games from last season change my view on what has otherwise been a pretty subpar career.

As far as undrafted talent goes, it couldn’t have went much better for Phillip Lindsay. In just 48.7% of snaps, Lindsay managed to have a 1,000 yard season. On the surface, it seems like Lindsay is the built in workhorse running back for the Broncos, but Royce Freeman was also a 500 yard rusher in his rookie season. If Lindsay has any sort of troubles getting things going in September, he could be at risk of losing touches to Freeman.

David Montgomery isn’t the fastest back to come out of this draft class but he played like a 3-down running back in college. He can break tackles and he can also succeed in the passing game. Feel for the game and whether he can handle an NFL workload isn’t the issue. The issue is competition for touches from Mike Davis and Tarik Cohen. The latter is already a built in staple of Matt Nagy’s offense. I don’t want to put my eggs in David Montgomery’s basket at a 5th round ADP.

If you’re worried about Todd Gurley’s knee, you should be especially worried about Sony Michel’s own knee issues. I was very high on Michel in the early spring until we learned that he was having a knee procedure. It’s hard to speculate on a running back’s future health, but his history is not promising. Michel finished as the PPR RB35 last season in the 12 games that he played. That ranking really doesn’t do justice to the good game that he had but he was 8th in the league in red zone touches but only converted 6 of those carries into touchdowns. The most appealing argument for Sony is that the Patriots were 3rd in the league last season in running plays.

I find Chris Carson to be very similar to Sony Michel in the fact that he plays for a team that runs a lot and that he has a lengthy injury history, just like Michel. Carson turned a 52.4% snap share into 1,151 yard rushing season and that in itself is impressive. I really believe that the Seahawks want to get their 2018 first round pick Rashaad Penny a big share of the work load and it will lower the ceiling of Chris Carson who finished as the RB18 last season.

Mark Ingram is heading into a situation that looks better on the surface than I think actually is. Lamar Jackson is going to be a massive part of the running game in Baltimore and I could see Gus Edwards being a part of it as well. If you were an owner of a Baltimore Ravens running back last year then you know that it certainly had its frustrations attached to it.

Penny is going to see an increased work load on the team that ran the second most in the league last season. Penny already comes with a 4.9 YPC from last season and a lot of off season praise from his coaching staff. I expect him to dig into Chris Carson’s work load if he can start off hot.

I’m purely betting on talent here and the assumption that the Redskins would like to see what they have out of a healthy Derrius Guice. He looked really good in the preseason last year before he tore his ACL and now he is a full go for training camp.

Reports have said that Jordan Howard has looked very dominant in training camp with the first team. I have hope for Jordan Howard in this offense. Matt Nagy’s offense wasn’t the best fit for him and yet he was still able to find success. I am a bit nervous about Miles Sanders looming if Howard doesn’t get off to a good start.

With the New Year, we have all new #FantasyBaseball projections for every hitter and pitcher courtesy of @rudygamble and @steamerpro https://t.co/J5nT6aQkSA