Want a chance to compete against the top industry analysts in next year’s RazzBowl? Apply now!

Week two of Days of Antonio Brown’s Life is in the books and what a crazy week it was! I loved the scene where Antonio farted in his doctor’s face and then looked over at the camera with a sh*t eating grin [see below]. Farts are so disgusting. And hilarious! 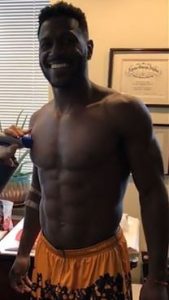 Days of Antonio Brown’s Life Week 3 Sneak Preview: AB is released by the Patriots. Some say he was let go because he farted in Belichik’s face, some claim he grabbed Gisele’s titties, others insist it was actually Brady’s dong he grabbed. All we know for sure is Josh Gordon is as happy as he’s been since he got that new bong.

Week two of the RazzBowl is also in the books and Danny Kelly of The Ringer still clings to an 8 point lead in the overall RazzBowl standings. Danny is the only man to EVER hold first place in the RazzBowl for two consecutive weeks, a true legend among men. Kelly also added to his strength forking over 30% of his budget ($3) during this week’s FAAB run to snag top RazzBowl FAAB target Demarcus Robinson [$8, $7, $5, $4, $4, $4, $3, $3, $3, $2, $2, $1] who was added in all 12 of the RazzBowl leagues where he wasn’t already owned, for a total of $46—those who purchased DRob spent an average of 38% of their entire FAAB budget!

RazzBowlers seem to be buying into Robinson’s outburst this past week catching all six of his targets for 172 yards and two touchdowns. I’ll admit, anyone taking Mahomes’s balls in their hands has my attention.

What makes the RazzBowl especially unique compared to other best ball formats and industry leagues is our addition of a $10 FAAB budget for the entire season with a minimum of $1 bids. This allows teams to cycle out dead roster spots (e.g. Andrew Luck, Lamar Miller, etc) but it also means each team will only be allowed a maximum of ten moves for the entire season. Every dollar of each competitor’s free agent budget is just as precious as a Bill Belichik smile.

When teams choose to pony up their FAAB, it’s worthwhile to take a look and see why. There could be a goldmine of speculative adds buried in the RazzBowl transactions this season.

Here are the players purchased in at least four of the 15 RazzBowl leagues this week:

Gardner Minshew [$2, $2, $1, $1, $1, $1] – Uncle Rico Minshew looks great thru two full games. I mean physically he looks great, very beautiful man. I haven’t been able to focus on his football play, his sexy is too distracting. My main concern with Minshew is that he’ll abruptly leave football for an even more legendary pornography career.

Daniel Jones [$1, $1, $1, $1] – The third most added QB in RazzBowl leagues this week, Jones will now have the opportunity to prove he was worthy of being picked 172 picks before the folk hero Gardner Minshew in this year’s draft. Good luck with that, DJ!

Will Dissly [$4, $2, $2, $2, $1, $1, $1] – The top tight end add in the RazzBowl FAAB run this week, Dissly made the Steeler defense dizzy in week 2 as he broke out with 5 catches for 50 yards and 2 touchdowns. The 4th round pick out of Washington also caught two touchdowns in only four games during his rookie season last year. There’s a chance he blossoms into a top 10 tight end this season.

Raheem Mostert [$6, $4, $3, $1] – MB asked if Mostert is a must-start, earlier this week. Answer: Only if your team sucks! But seriously, do you really want to plug a running back in a committee of three into your lineup? Let’s call him a fringe flex option in most leagues.

Ty Johnson [$1, $1, $1, $1, $1] – The running back who ate C.J. Anderson was just released by the Lions which opens up the second string job for the 6th round rookie running back out of Maryland. Ty Johnson is now the Kerryon handcuff to own in Detroit, and there’s an outside chance he’s more than just a handcuff.

Jeff Wilson Jr [$1, $1, $1, $1, $1] – We discovered Rudy Gamble is sorcerer last week when he came on the Razzball Fantasy Football Podcast and suggested picking up Jeff Wilson Jr in deep leagues while he was still on the 49ers practice squad. Four days later, Wilson took 10 carries for 34 yards and 2 touchdowns. Someone test Rudy for PEDs!

Preston Williams [$1, $1, $1, $1] – I was one of the four RazzBowlers to spend a dollar on P Willy this week and I’ll admit it didn’t feel great to spend 10% of my minimal budget on a Dolphin, but Nick Foles was burning a hole in my roster. A ringing endorsement for Preston Williams there, I know. Lukewarm as I may be, Williams is an ideal best ball play; he’s a large athletic target on a team that will play from behind almost every week.

Devin Smith [$1, $1, $1, $1] – Some RazzBowlers are starting to get more desperate than Antonio Brown’s doctor on Taco Tuesday. Gallup’s injury has freed up some targets in Dallas and the former Jets’ speedster, Devin Smith, just might soak those targets up.

Jason Witten [$1, $1, $1, $1] – Is it possible Booger is actually worse in the Monday Night Football booth than Witten? It’s close, the jury’s still out. Any chance we can get Booger out of retirement next year too?

Want a chance to compete against the top industry analysts in next year’s RazzBowl? Apply now!

Find Donkey Teeth on Twitter. Subscribe to his podcast: The Razzball Fantasy Football Podcast on Itunes, Stitcher, or wherever you get your podcasts.