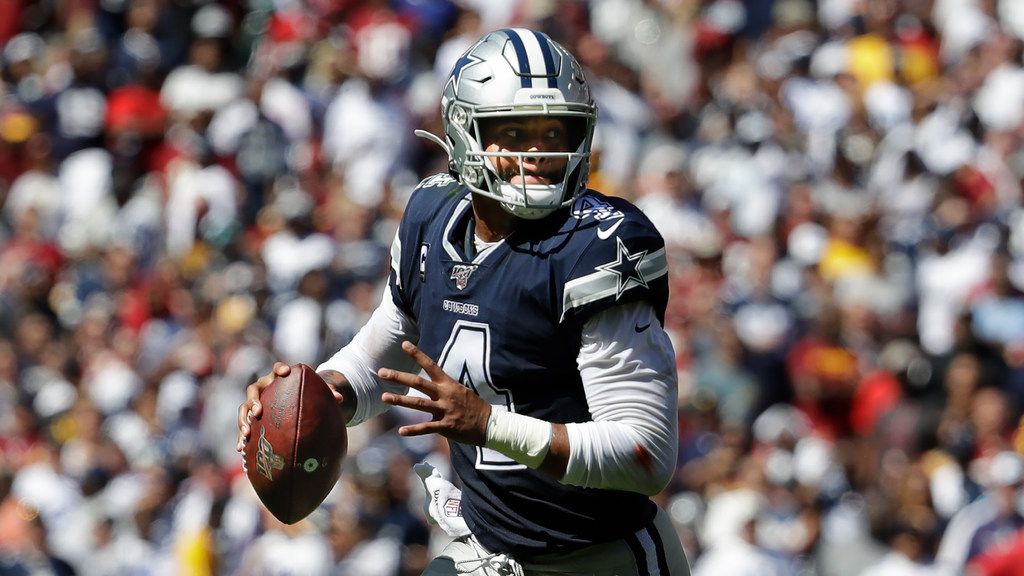 While it still is early into the 2019 NFL season, we are getting more clarity with which teams are actually good or bad on either side of the ball. With more and more clarity, we can make better and better fantasy decisions with how we should manage or rosters. Who we should start, and who we should sit.

So let’s talk about that very subject.

The 2019 Cowboys offense is off to a flying start through two weeks of the season, as Dak has thrown for 337 yards and 3.5 TD’s per game, while Zeke has averaged 87 rushing yards and a TD per game. It’s clear how much this offense has been elevated with the arrival of OC Kellen Moore, and the solidification of Amari Cooper in their receiving corps. Prescott will get to face off against the Dolphins this Sunday at home in a glorified scrimmage game. I don’t need to spend too much on this, but the Miami dolphins is just bad. They already rank dead last in the NFL in total yards given up, and rank 32nd in pass defense DVOA. Prescott will absolutely crush it this week, just like Lamar Jackson and Brady did these past two weeks.

While he didn’t set the world on fire, Week 2 was definitely an improvement over the start of the season for Jameis, as he threw for 200 yards and a score, and didn’t turn the ball over a single time. Baby steps! This week he’ll face off against a Giants secondary at home that has been very bad to start the season. They currently rank 31st in pass defense DVOA after giving up big games to Dak in Week 1, and Josh Allen last Sunday. I do think Daniel Jones could breathe new life into their offense and team, but it won’t be enough for this secondary.

Thanks to his ability to use his legs, Allen has put together a nice start to the season (even more so if he limited his turnovers in Week 1). He’ll continue the streak of impressive fantasy performances in Week 3 against a Bengals secondary that just got torched last Sunday by the 49ers, and rank 29th in pass defense DVOA. Our projections have him as the 5th-best QB on the slate for a reason, and he’s an excellent start tomorrow.

While I do believe that the Rams offense will continue to get better as the season progresses, I don’t see Goff lighting the world on fire this week on the road in Cleveland. To start the season, the Browns funnel production on the ground, as they rank 8th in pass defense DVOA, but 20th in rush defense DVOA. Sure, that number is a lot lower thanks to the horror-show that is the Jets passing attack, but the strength of this unit so far is their secondary. Ranked just outside of the Top-15, there are better options in Week 3 at the QB position than Goff

While Mayfield had a huge bounceback game this past Monday against the Jets, this will be a much tougher matchup against the Rams, even if the Browns are at home. The Rams defense has been really good against the pass, ranking 4th in pass defense DVOA. Again, that number is a lot higher because of Brees’ injury last week, but the Rams even did a good job against Cam Newton in Week 1. There are better options this week than Mayfield.

Everything is shaping up for Carson to have a killer week on Sunday. First off, the Seahawks are -5.0 home favorites, so we don’t have to worry about his workload. Second, Carson will face a Saints defense that ranks dead last in rush defense DVOA through two weeks of the season. Third, our rankings have him as a Top-12 back. You can’t go wrong with Carson this week.

While Montgomery didn’t see much action in a terrible Week 1 for him and the rest of the Bears, last week was much better. Not only did the rookie’s snap rate jump from 38% to 45%, but he rushed for 62 yards and 1 TD, and caught another TD against a very tough Broncos rush defense. Montgomery’s value and production should only continue to rise from this point moving forward. This week, he’ll run against a Washington rush defense that ranks 29th in rush defense DVOA through two weeks through the season. He’s a solid RB2 this week, and his value will continue to rise after Monday night.

Thanks to injuries in the Buffalo backfield, the 36 year-old veteran Frank Gore will draw the start against a Bengals rush defense that ranks 31st in rush defense DVOA. With a healthy workload and a great matchup as a home favorite, Gore is a great RB2 this week, or value play for DFS rosters. Fire him up with confidence.

Both backs should be benched this week against Chicago on Monday night. With the injury to Derrius Guice, we saw last week what this backfield will look like, and it isn’t too pretty. Thompson is definitely the back that operates on passing downs, but didn’t find too much success against the Cowboys. Peterson, on the other hand, found the endzone, but only rushed for 25 yards on 10 carries. Not great, Bob! This week, they’ll both face a Bears defense that ranks 5th in rush defense DVOA to start the season. Both should be left on the bench.

Like Washington, both RB’s are listed here, as I think you should leave both on the bench this week. Damien Williams has been ruled out for this matchup, leaving the backfield duties up to rookie Darwin Thompson, and veteran LeSean McCoy. However, McCoy has also been dealing with an ankle issue, and according to ESPN’s Adam Teicher, the Chiefs are being cautious about overloading McCoy with touches. Thompson is the best bet to lead this backfield in touches, and I’m not confident in the matchup. They’ll face a tough Ravens defense that ranks 6th in rush defense DVOA. This game should end up being a shootout between Lamar Jackson and Patrick Mahomes, and I don’t see either backfield finding much success.

Through two weeks of the season, not only have the Patriots offense been very efficient, but the Jets defense has been very… bad. As -22.0 home favorites with a game total set at 43.0, the Pats offense should have no issues moving the ball down the field. With the recent news of Antonio Brown getting released by the team, Edelman and Josh Gordon should receive an uptick in targets both in this game, and moving forward. With this production against such a weaker opponent, it’s no shock to see Edelman as our #3 WR in the projections.

As I mentioned above with Jameis, this is a very easy matchup for Tampa Bay at home, and the Bucs offense should be able to move the ball down the field with ease. Godwin absolutely torched the Panthers defense last Thursday, catching 8 passes for 121 yards and 1 TD. His production should continue this week against the Giants, and he brings serious Top-10 upside at the position this week, even being the #7 receiver in Rudy’s projections.

While they are on the road, the Lions passing attack, thanks to Matthew Stafford, has been more aggressive with each passing week. Although it is early, this Eagles defense funnels production through the air, ranking 23rd in pass defense DVOA, while 2nd in rush defense DVOA. Golladay himself draws a good matchup against Rasul Douglas, who has allowed 3.1 fantasy points per target so far in the season. It’s a matchup that Golladay and Stafford can both exploit.

While this Bengals passing attack is certainly aggressive enough, and both Boyd and Ross both finished with 100+ receiving yards last Sunday against the 49ers, I don’t think either will do that great on the road against a tough Bills secondary. Through two weeks, the Bills rank 7th in pass defense DVOA (while they rank 27th in rush defense DVOA), showing how they’ve continued the strong play on defense from last year. There are better options for WR3/FLEX plays this week.

Here’s a fun fact. Since the 2015 season, the Jets have not scored a single touchdown in Gillette Stadium, and have been outscored 105-12. I’m not sure if Luke Falk is going to change those fortunes. It’s a very tough matchup for the Jets passing attack, which isn’t very fantasy relevant until Josh Darnold gets back from his bad case of the mono.

Witten is a fine streaming option for those that need it against the Dolphins. Not only did Miami allow 24.8 fantasy points to Mark Andrews in Week 1, but Witten himself has posted back-to-back double-digit fantasy performances in PPR leagues. He’s a great fill-in option against a bad Miami secondary, and could see an even higher uptick in targets with the injury Michael Gallup suffered.

The Bears are being cautious with Burton, which is great news for him, but bad news for us fantasy owners. It’s a tough matchup as well against a Washington defense that shut down Zach Ertz in Week 1, as he only finished with 54 yards and no TD’s. There are better options out there than Burton.

The Cowboys will have no issues moving the ball down the field, and Maher will have plenty of chances to hammer in some XP’s and FG’s at home in the dome.

We’ll see how Josh Rosen looks compared to Fitzpatrick, but I’m not expecting much.

He’s not the worst option at home, but until he can get out of the funk that he’s currently in, it’s best to explore other options.

While the Chiefs haven’t been as bad to start the year as they were in 2018, this is still a very tough matchup against Lamar Jackson, and both teams should be putting up some numbers.

Good luck to everyone in Week 3, and I will be back on Thursday for another edition of Ambulance Chasers!