About a week ago, all the buzz in Seattle was about how the decision makers had grown tired of Marshawn Lynch‘s antics and that they were ready to chase to him out of town with pitchforks. Apparently, Lynch has a very tense relationship with head coach Pete Carroll and they have little to no communication. You’re kidding me, right? Those two seem like they’d be two peas in a pod. I just had a great idea for a reality show. Lynch and Carroll have to live together in a college dorm room! Every time Pete comes back to their room Marshawn has one of Pete’s ties around the doorknob. Why would Lynch want to be bothered with his head coach when he could care less about the nation’s president? Lynch’s decision to be a “no show” to the team’s Super Bowl victory celebration at the White House did not go over well with many. Sorry Obama, but Marshawn had better things to do than pay you a visit… 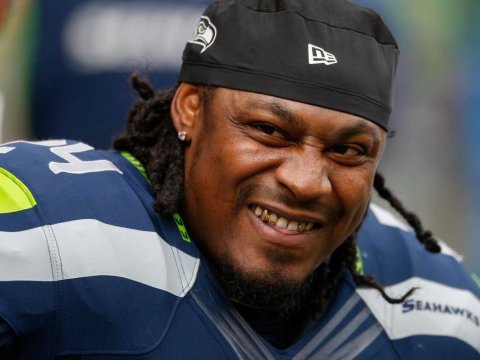 Damn you Matt Asiata and your 3 vultured touchdowns. I had Jerick McKinnon started in both of my leagues and that happens. Ugh! And now there’s talk of Adrian Peterson returning to the Vikings. Say it ain’t so. I know it might sound hard to believe but I saw a stat that showed that the Minnesota running game really hasn’t skipped a beat since losing Peterson. Here’s an idea, put a Ray Rice and Adrian Peterson in the octagon and whoever comes out gets to play the rest of the season. The loser has to retire and get a tattoo of Roger Goodell on his back. Who wouldn’t pay to see that? I’m full of ideas today.

Mark Ingram is back and ready to make a difference in fantasy football. In the last 2 weeks Ingram has carried the rock 54 times for 272 yards and 3 touchdowns. TSM doesn’t expect him to keep up that pace, but it sure would be nice to have him on your roster while he tried. Or until he gets hurt again.

I said it last week and I will say it again this week. Holy Mac(lin)kerel! Like Ingram, Jeremy Maclin has had 2 outstanding weeks in a row combining for 18 catches, 345 yards and 4 touchdowns. Old Maclin-Donald had a farm and on that farm he had a sh!t load of fantasy points! E-I-E-I-O.

Thank you for the nice rebound game Julian Edelman. The Stats Machine and I both appreciate it.

Do you like it when your running back scores 2 touchdowns in a game? Hill yeah! It was a big week for running backs with the word hill in their last name last week. Montee Ball who? Seriously though, I have got to believe that there is no way he gets the job back when he returns. He was awful before his injury and his replacement has been great. I actually had to make a decision and I dropped Ball to keep Hillman. This past week he carried the ball only 10 times for 16 yards, but he did find the end zone. He also chipped in with 7 catches on 10 targets for 47 yards and another touchdown. In a game where the Broncos were dominated by Tom Brady and the Patriots, that’s a pretty good showing. How about Hill? How about 24 carries for 154 yards and a 2 touchdowns! Now that’s some serious fantasy points. I like Hillman over Hill because when Giovani Bernard returns the job will be his again, but I’d still like to own both. I seriously doubt either of these guys are available in your league, but if they are, I have this advice for you. Head for the hills!

How many of you know who Russell Tyrone Jones is? I’m guessing very few of you. Well it’s Ol’ Dirty Bastard of course. One of the founding members of The Wu-Tang Clan. Sadly he died back in 2004. Or did he? I’m pretty sure ODB is catching passes from Eli Manning for the New York Football Giants. Especially last week in which he caught 8 of 11 targets for 156 yards. He didn’t manage to score a touchdown, but those stats will still give him some solid street cred. Enter the We-Tang ODB Jr. Honorable Mention (Mike Evans 29.95)

Just missing the honors last week Mychal was determined to do it this week and he has succeeded. With 8 receptions on 11 targets for 38 yards and 2 touchdowns, Rivera has emerged as a garbage time stud. The Stats Machine does not discriminate against garbage time points, and neither should you. Honorable Mention (Charles Clay 21.05)

One week they are running him out of town, and the next, they are saying there are absolutely no plans of trading him. It’s amazing what 67 yards on the ground, 2 touchdowns and 5 receptions for 76 yards will do for you. I think some call that “beast mode”. (Lynch Mob is an American Hard Rock band featuring former Dokken guitarist George Lynch, who has been the band’s only permanent member.) Honorable Mentions (Ronnie Hillman, Jeremy Hill, Mark Ingram, Matt Asiata)

They might have to change A Charlie Brown Christmas to An Antonio Brown Christmas if he keeps playing this way and delivers his owners a fantasy football championship. You know what happens when you catch 11 of 16 passes thrown to you for 144 yards and a touchdown with 91 yards after the catch? You get called out by The Stats Machine. I think I am going to have to add an Antonio Brown fathead to my Hanuakkah list. Honorable Mention (Jeremy Maclin 33.05)

Last week I said that the only thing that will keep Gronkowski from being the top tight end for the rest of the season is an injury. Here we are a week later and Gronk is once again the tight end of the week with 9 catches on 10 targets, including an amazing one-handed grab, for 105 yards and TD. As for the one-handed snag, Tom Brady was quoted as saying to Gronk “How the f*ck did you catch that?” Honorable Mention (Mychal Rivera 25.95)

There were no duds of the week. How about that. If you are craving some duds grab yourself a box of milk duds and enjoy. Mmmmm. Milk duds!

Examine the stats yourself (Downloadable Excel).