[put on the chillhop radio station and just let it flow]

Welcome everyone! It’s a privilege to have you here in the Year of the Bubble. No doubt you’ve been refreshing training camp vids and working on your Austin Ekeler-style abs for the past few months. Some of you have been following Razzball Football in the off-season the whole way and you have read every last word. Thank you! Some of you are coming out of fantasy football hibernation right now, and you’re looking for the best fantasy football content to help you win your (virtual) office league. Welcome back!

Without further ado, let’s kickoff our weekly look at the Top 30 Quarterbacks!

What’s up everybody? I’m EverywhereBlair, and I’m your quarterbacks guru for the 2020 fantasy football season. If you’ve been reading the off-season material or have been reading my work on pitchers on the baseball side of Razzball, then you already know me and what to expect. If you’re coming back to Razzball from an off-season hiatus, or joining us for the first time, let me show you around a bit!

Foremost, we’re happy to have you as part of the Razzball community. Now, as part of that community, you’re getting a TON of free stuff. First, the overall rankings from the award-winning Rudy Gamble here, from site editor Donkey Teeth here, and from senior editor MB here. Wow! Three sets of rankings for you to choose! And, as if that wasn’t enough, we’ve got draft guide material for beginning to average drafters here, and for advanced drafters here. If you’re into media, we’ve got a podcast and a video channel. Want to follow the writers on Twitter? Then follow this Twitter list! Lastly, if you want to save $25 on entry fees at the National Fantasy Championships, use the code RAZZAUG when signing up.

But wait, there’s more! If you want to show us your support for all this free stuff that we’re giving you to have a great time playing fantasy football, you can purchase a premium membership for even more weekly tools or DFS packages. I know times are tough and if Covid has you down or in a tight spot, don’t worry about premium packages. If you can leave some comments and let us know how we’re helping you, that would be great. Tell a friend about us, tell your coworkers, and share the articles you like on your favorite social media platform. We’re here to help you win your fantasy leagues and entertain you with some quality content. Sound good? I’m glad we’re all caught up now!

Now, even though we’ve given you three sets of rankings as you see above, my role is to give a different perspective based on news updates and week-by-week performance. This will help you understand which QBs to roster, which to find on the waiver wire, which QBs to trade, or which QB to start. I provide my information below in a table that includes advanced stats not visible on the other ranking options. This helps you make your own decision! As always, the writers are happy to answer your questions in the comments or on Twitter if you have them.

Absolutely! In most scoring formats, the quarterback is one of — if not the — highest scoring positions on your fantasy football roster. If you played fantasy football in 2019, you know that many office leagues were won by Lamar Jackson. Among more competitive groups, though, it’s important to know that quarterbacks in the QB6-QB15 range have fairly similar projections. Now, I’m not saying to forget about quarterback entirely. What I’m saying is that a wise player who streams Daniel Jones and Baker Mayfield based on matchups can easily match if not outperform the manager who took Lamar Jackson in the second round.

Generally, the Razzball team has been aiming for Kyler Murray in 2020. Most of us agree he has the highest likelihood of outperforming his projections, which would give our teams the perfect balance of upside and draft capital. Murray has generally been drafted in the 5th/6th rounds of standard leagues. If you don’t like Murray or he’s drafted before you, the next best values for outperforming projections are Deshaun Watson and Russell Wilson, followed by Matt Ryan. In standard 12-team leagues in 2020, you want to draft 2 quarterbacks for sure, and in deeper leagues or best ball leagues, you absolutely want three quarterbacks.

In superflex leagues — where managers can start two quarterbacks per week — of course the above information becomes irrelevant. In a superflex league, QB scarcity trumps other draft positions, and it’s acceptable to draft 2QBs within the first six rounds. You want to emerge from a superflex league draft with at least 3 QBs who all have different bye weeks. Because there are only 30ish starting quarterbacks on most weeks, it’s unreasonable for every team in a 12-team league to have three starting QBs. So, be aggressive and get those QBs in superflex leagues.

Tua Tagovailoa — Probably the biggest question of the preseason is who will emerge as the starting quarterback for the Miami Dolphins. This matters because the Dolphins have a pass-first game with several capable wide receivers and a porous defense that will require heavy use of the passing game. Incumbent QB Ryan Fitzpatrick was a lackluster fantasy QB in 2019, and is very much a reserve QB with a known floor. The Dolphins 2020 first-round draft pick, Tua Tagovailoa, however, is an unknown quantity due to his recovery from a severe hip injury that kept him sidelined through most of 2020. Experts agree he will take the reins of the Miami offense at some point in 2020; the question is when. Most office-league drafters won’t need to worry about the Tua/Fitzmagic quarterback battle because they would be backups or a third quarterback anyway. But for those players in a superflex league or dynasty, you’re absolutely drafting Tua for his upside. Just be sure to get another late-round QB like Sam Darnold or Drew Lock to ensure you’ve got a suitable backup for the times when Tua is wearing a headset on the sidelines and carrying printouts to “study” the game.

Gardner Minshew — OK, if you’re in that group of people who are just returning to fantasy football this week, you’re hearing a ton about Gardner Minshew. The Jaguars’ 2019 6th round pick had an acceptable 2019 fantasy year but has more upward steam among industry drafters than probably any other quarterback. Some sites are ranking Minshew as the 6th best QB on the board; meanwhile, fantasy managers are picking him as the 22nd QB for their fantasy teams. In other words, he wouldn’t be rostered in most office leagues, and even deeper home leagues and superflex leagues would consider him a backup. Now that Budweiser has offered people free Bud Light for a year if they draft Minshew in the first round AND win their fantasy league (a $37 value!), more and more people will be clambering after the mustachioed-Minshew. Readers, just let the chillhop take over and don’t worry about Minshew. His Razzball Consensus Ranking is QB21, which means he would be a backup in a standard 12-team league. If you’re in a shallower league, don’t even worry about Minshew. Let some other beer-seeking dupe draft Minshew early. That said, Minshew sympathizes with Razzball’s concern over the ESPN fantasy ranking system. 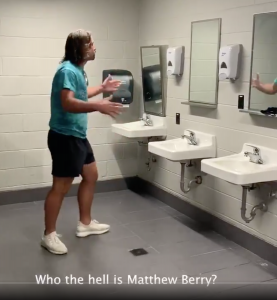 Ryan Tannehill — Tannehill is either going to win a lot of fantasy leagues this year or lose a lot of fantasy leagues this year. After a stellar end to his 2019 campaign, analysts disagree whether he should be your main fantasy QB or whether he should even be drafted on a run-heavy Tennessee Titans offense. In the Razzball Consensus Rankings, he’s easily the most controversial QB, with our analysts putting him anywhere from QB10 to QB 26. Myself? I think you should be drafting Tannehill. His value among other drafters is low, however, so I’ve generally been able to draft Tannehill as a second QB, which just makes your team that much stronger.

Here’s the exciting part, my friends! I’m giving you my own QB rankings to start the 2020 season, and I’m giving you a table of 2019 data to help you understand where each QB’s strengths and weaknesses lie. You can look at the table and determine yourself if you want to be more aggressive, defensive, or just trust the system. I’ll be updating the table as we go through the year, and if you’re familiar with my baseball pitcher rankings on the baseball side of Razzball, you’ll see how quickly these kinds of tables help you understand trending players.

It’s fair to point out that I didn’t include rushing on the category ranker because so few QBs rush for meaningful yards. I incorporated rushing into my ranking, but I didn’t display it in the table because it complicated matters. After the season starts, you’ll be seeing rushing usage come into play on the data table.

Aye, you made it this far, didn’t ya. EverywhereBlair is, well, located at home right now. He’s a historian and lover of prog-metal. He enjoys a good sipping rum. When he’s not churning data and making fan fiction about Grey and Donkey Teeth, you can find him dreaming of shirtless pictures of Lance Lynn on Twitter @Everywhereblair.