I’ve talked about the games. I’ve ranked the players. I’ve given you fantasy games to play. And now I’m spent.  I’m just a shell of who I once was. But I will forge ahead!

Before we get to some wildcard linkage take a gander at our Razzball Commenter League Champion Chris Abbott with his major award!  Congrats Chris!  Now, for you individual league winners.  If you want your trophies you better get you addresses to me at doc at razzball dot com or you’ll be crying in your beer all offseason! And don’t forget where that trophy came from.  The guys at Fantasy Trophies provided us with the trophies.  Give them some love! 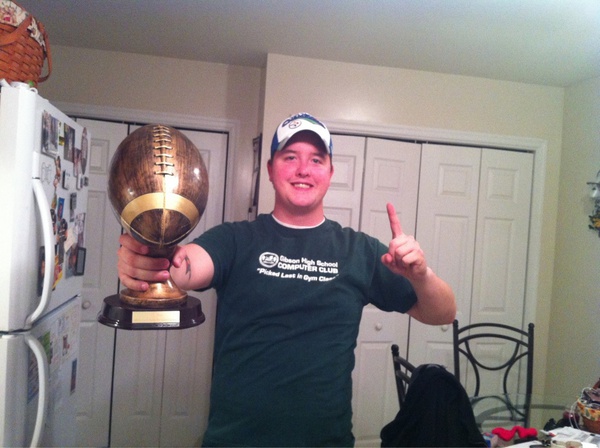 Brian Quinlan takes a look at Saturday’s games with a fantasy focus over at Fantasy Football Whiz. Follow Brian on Twitter for all the latest from whatever oozes out of his fantasy mind.

The Fifth Down Blog at the N.Y. Times breaks down the Saturday wildcard games.  You can also follow them on Twitter at 5th DownFantasy.

The new overtime rules that are being implemented for the playoffs are explained by our friends over at The Football Girl.com. And yes, you can also follow them on Twitter.

Check out Dynasty Blitz’s playoff rankings.  And while you’re at it you should follow the guys that run Dynasty Blitz, Brian Fontaine and Andy Miley.

Jeff Ratcliffe over at Pro Football Focus rickshaws us through Value Town for this weekends games. Follow Jeff on Twitter like an imprinted gaggle of goslings.

Carl is not exactly happy about the Shehawks making the playoffs.  I don’t believe Carl is on Twitter.  If he is, please point me in the right direction.