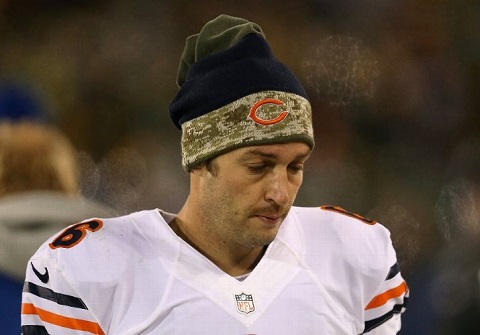 Well, that was interesting. But only if you’re a Packers fan. Ben Roethlisberger? This is Aaron Rodgers, and he just escalated the situation by scoring 6 touchdowns and NOT losing to the Jets. Which seems insurmountable escalation right there. If you missed it (you probably should have), the Bears once again confirmed that they are a terrible football team. If they didn’t come out after half-time, already losing 0-42, I probably wouldn’t have noticed. I doubt the Packers would have noticed, that’s for sure. But who doesn’t want to make history? So for the first time in 90 years, the Bears have now given up 50 plus points in consecutive games. And the realist part of all this? Oh yeah, that’s right, this is the Bears coming off a bye. Silly Jets fans, and you thought the 2015 first overall draft pick was yours for the taking…

Anthony Dixon – 9 CAR, 62 YDS. While the carries will start moving more towards Fred Jackson (3 CAR, 10 YDS and 4 REC, 39 YDS) as we move forward, he did not look fully healed from the groin injury. I would expect Dixon and Bryce Brown (7 CAR, 35 YDS and 6 REC, 65 YDS) to split the majority of touches for at least one more week with the short turnaround time on Thursday.

Joique Bell – 10 CAR, 44 YDS and 2 REC, 37 YDS, There’s a hole in the universe, and it’s called the Lions robustly terrible running attack consisting of Bell, Reggie Bush (4 CAR, 20 YDS and 1 REC, 5 YDS), and Theo Riddick (3 CAR, 0 YDS and 2 REC, 5 YDS). I’m not complaining, but sooner or later, this thing will just start to suck everything in it’s path… almost as if there was too much suck held within it’s suck.

Lamar Miller – 4 CAR, 10 YDS and 1 REC, -4 YDS. He was limited going in, apparently not limited enough to add on a reception of negative four yards. Obviously the AC joint was an issue, and I’d go with another option with a Thursday night game coming up. The injury may affect him in future weeks, so keep that in mind.

DeMarco Murray – 19 CAR, 100 YDS and 6 REC, 31 YDS. I feel like this would make a great Dr. Who episode: The good doctor travels back in time to save Murray at Wembley right before the Daleks dressed in Jags uniforms exterminate him. Then again, I don’t know anything about the show or what it’s about.

Blake Bortles – 22/37, 290 YDS, 1 INT and 3 CAR, 3 YDS. Blake-Bortles-Battle-of-Britain-besmirched. If only Bortles had taken his Cialis… when the time was right, he would have scored.

Denard Robinson – 15 CAR, 60 YDS, 2 TD and 2 REC, 10 YDS, 1 FUM. Has a tendency to disappear during parts of a game, but is out-carrying Toby Gerhart (4 CAR, 2 YDS) by a large margin, and I don’t see anything to change the dynamic. At least London was already used to unreliable Jaguars, so there’s that.

Colin Kaepernick – 14/32, 210 YDS, 1 TD and 4 CAR, 24 YDS, 1 FUM. My expert analysis here is that I think his tattoos are weighing his throwing arm down, causing a ripple-affect across his entire game. It’s science.

Drew Brees – 28/47, 292 YDS, 3 TD, 2 INT and 2 CAR, 7 YDS, 1 FUM. At that time Breesus said, “I praise you, Father, Lord of heaven and earth, because you have hidden these things (incredibly terrible decision making, reckless bravado, being really short) from the wise and learned, and revealed them to little children (interceptions to kids or something). Yes, Father, for this was your good pleasure (they’ll never blame me! Thanks pops!).” Matthew 11:25-26

Mark Ingram – 27 CAR, 120 YDS and 3 REC, 19 YDS. Okay, yeah, it’s official, I’m tired of waiting for the real Mark Ingram to reveal himself. This new one will do just fine. Go forth as I let other under-achieving players break my heart over and over again to only watch them go on to do amazing things when I stopped caring long ago. Why hello there C.J. Spiller…

Justin Forsett – 20 CAR, 112 YDS, 2 TD. I see that Forsett is still good at football. A statement that was laughable just a few months ago, might I add.

Kendall Wright – 4 REC, 53 YDS. Well, he had the most receptions, was the most targeted and had the most receiving yards. That being said, with a line like that, it’s almost as if the glass is half full, but just completely hemorrhaging liquid out it’s ass. So the lesson here is that Wright has made me into a suicidal optimist. That makes me emo, doesn’t it?

“LEROOOOOOOY JEEEEENKINS!” – Mike Mitchell. I think it was certainly nice of Mangold to spot Mitchell’s flip and make sure he landed properly. Good character guy there.

Martavis Bryant – 4 REC, 143 YDS, 1 TD. I’m going to go out on a limb here and say that Martavis Byrant could have some potential. I know man, I’m way out there, but I’m telling you, maybe-sorta-kinda…

Antonio Brown – 8 REC, 74 YDS, 2 FUM. After carefully considering the pros and cons of Brown’s performance, I have decided to continue liking football.

Charles Sims – 8 CAR, 23 YDS and 2 REC, 17 YDS. Well, at least it wasn’t Doug Martin gaining an inconsequential amount of yardage. It’s nice to mix things up a bit once and a while.

Peyton Manning – 31/44, 340 YDS, 5 TD, 2 INT. Looks like the Raiders watched Interstellar on Saturday and learned going into the black hole is not always a bad thing.

Ronnie Hillman – 6 CAR, 13 YDS and 2 REC, 9 YDS. Maybe next time don’t tell the other team you want to feature a guy, Denver. With a foot injury, Hillman was limited for most of the game. He did have a chance at a touchdown if not for the patented Manning duck throw, but it turns out that C.J. Anderson (13 CAR, 90 YDS and 4 REC, 73 YDS, 1 TD) was the “hot hand” this game.

Darren McFadden – 7 CAR, 14 YDS and 3 REC, 22 YDS. Well, looks like burying a football didn’t work. So what will they bury next for motivation? Oakland? I might try Oakland here.

Carson Palmer – 25/36, 241 YDS, 1 INT and 1 CAR, 1 YDS. A question I never thought would be relevent… ever: “Carson Palmer’s injury, is it going to hinder the Cardinals title hopes?” Well, we’re going to get an answer, that’s for sure. Palmer looks to be out for the year after suffering a torn ACL. It would seem that The Drew Stanton Experience (3/5, 85 YDS, 1 TD) is in full effect. Arizona Starship, all aboard.

Michael Floyd – 1 REC, 11 YDS. He had the ninth most productive day among all Arizona receivers. Ted Ginn Jr. had a better day, and that’s the first time I’ve seen Ted Ginn Jr.’s name anywhere in three years. This is now the last week that I’ll ever have to play Michael Floyd. So thanks for that I guess.

I lived in Seattle for 10 years. Trust me, pigeons are f*cking aggressive over there.

Russell Wilson – 10/17, 172 YDS, 2 INT and 14 CAR, 107 YDS, 1 TD. Eli asked Coach Coughlin if it was possible to bring Tom Hanks into the game yesterday in order to contain Wilson. How cute. Rest assured though, Tom Coughlin and Perry Fewell will correct for Wilson’s scrambling ability two weeks from now.

Marshawn Lynch – 21 CAR, 140 YDS, 4 TD and 1 REC, 23 YDS. I’ve been to the Seattle Pinball Mueseum. It’s just Marshawn Lynch running around bouncing off of people. Seriously, what a Goddamn sexual tyrannosaurus. And that’s the medical term. 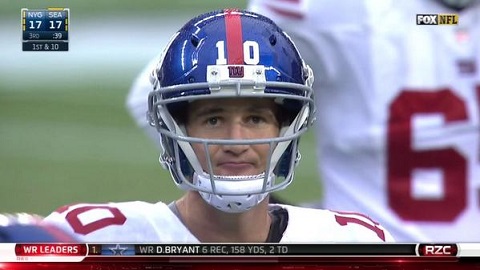 Thanks for joining us during this fun fact-filled journey!

Odell Beckham Jr. – Finally, a great athlete named Beckham… but seriously, what if, after all these years of searching, we have finally found him? We’ve found Plax 2.0? Should we warn him about firearms? I think so.

Brandon Marshall – 8 REC, 112 YDS, 1 TD. How can a team with Alson Jeffery (6 REC, 63 YDS), Marshall, and Matt Forte (17 CAR, 54 YDS and 3 REC, 27 YDS) be this bad? Also, Marshall was taken out of the game with some kind of ankle injury. Something certainly to keep an eye on going forward, if he didn’t kill anyone in the post-game locker room, that is.