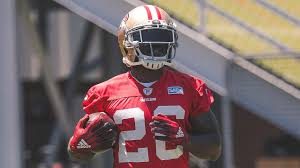 The rankings journey is finally coming to an end and we are all thankful. Well at least I am. I’m excited for my next series that will be a section by section draft guide like I did last year. Today I’m going to focus on the bottom feeder starters, running backs on the brink of being starters, a few handcuffs.

Tevin Coleman was not exactly who we thought he was when he took over as the lead back after the Devonta Freeman injury in Atlanta. He struggled to live up to expectations, as lofty as they were. But, he did manage to finish as the PPR RB19 and found the end zone 9 times. Perhaps it was the lack of production in the passing game that left a bad taste in fantasy owner’s mouths. This ranking could get better if Coleman projects to pull ahead of McKinnon and Breida for the lion’s share of the backfield work, but McKinnon and Breida both have a lot of talent and experience.

I don’t project that Latavius will take over the Mark Ingram role entirely for the Saints. That’s one of the reasons that I like Alvin Kamara so much. However, at a 46.8% snap rate last year, he scored 6 touchdowns on 24 red zone attempts and caught 22 passes. I don’t think that his snap rate will be 46% with the Saints, but he is the handcuff that I would want in a very solid offense. Even if you don’t own Alvin Kamara he is worth a buy.

I’m obviously not a Lamar Miller believer and I don’t think that he is the best running back on the Texans. However, he is the starter. Miller did pop for a couple of games last season but he still doesn’t have touchdown upside and isn’t reliable enough week to week in the yards department or passing game. I wouldn’t be surprised if D’Onta Foreman has more touches than Miller this season.

I like Justin Jackson more as a pure running back but there is always the chance that the Chargers and Melvin Gordon reach an agreement in August or September. If that happens, Jackson will not be fantasy relevant, but Austin Ekeler will still have a role catching the ball out of the backfield and toting the occasional carry. After finishing 16th in running back receiving and getting some work on the ground as well, at the very least, Ekeler is a week to week flex option.

ESPN’s Cameron Wolfe is predicting a nearly even timeshare between Kenyan Drake and Kalen Ballage. I don’t know enough about the Dolphins coaching staff or camp to dispute this quite honestly, so let’s roll with it. If they split work, I believe Drake to be the better pass catcher and most experienced back so I give him the slight edge in an ugly situation. Poor Kenyan Drake is never going to get his respect.

Dion Lewis had a great start to his career in the Belicheck regime, but he wasn’t able to pull away from Derrick Henry in the Titans offense. Eventually Derrick Henry pulled away from Dion Lewis towards the end of the season. I believe wholeheartedly in Lewis’ talent in the running and passing game but there is no way that Lewis can’t supplant Henry in the red zone. This gives Lewis a very low ceiling.

Jerick McKinnon was supposed to be the perfect fit for Kid Shanahan’s offense and then a torn ACL ended his 2018 before it even started. He still fits the scheme, but a competition for touches and probably not being at his best one year after surgery will lower his ceiling.

Miles Sanders is an explosive back and probably will deserve more work than he will get. Most likely he will split snaps with Jordan Howard and neither will emerge as more than a flex option.

Peyton Barber had a couple fantasy relevant weeks last season, but just like Lamar Miller, he’s a pretty uninspiring draft selection. While ranking 9th in the NFL in carries and 10th in red zone touches, Barber turned in a RB30 performance for the season. Barber simply doesn’t execute his opportunities at a high enough level and will likely lose a big chunk of his workload if he is not able to turn things around early in the season.

If D’Onta Foreman is close to 100% himself after the Achilles injury, he is really going to push Lamar Miller for touches. So far this preseason, the feedback from writers and the coaching staff has been positive in regards to his recovery and explosiveness. During his rookie campaign he averaged 4.2 YPC in a change of pace role.

Kalen Ballage is the other half of the Miami split backfield. He averaged 5.3 ypc last season in a very small sample size of 36 carries.

You have two choices: You can either buy into the running back that he was last season with Tampa or you can go by what you’re hearing from the coaching staff in the preseason. From a preseason standpoint, Jones has put on weight and impressed coaches. Barber will likely begin the season as a starter in the newly implemented offense. I also don’t want a running back in this offense without seeing any preseason action.

If Melvin Gordon misses a big chunk of time because of his holdout, Justin Jackson could prove to be very useful to your fantasy teams on first and second downs. When Jackson saw some snaps during Gordon’s injury last season, he was averaging over 4 YPC. Even if Ekeler gets the majority of the work, Jackson should still be a value.

I don’t want any part of him or his diminishing skill set. There is a possibility that he is cut during the preseason. If I’m taking any Bills back, I’m taking my chances on Devin Singletary late in the draft.

I believe that Todd Gurley will be just fine and used more sparingly than he previously was. This gives the very talented Darrell Henderson a shot to be relevant.

Trade question, I am in a very deep 12 team devy/dynasty league (ppr and IDP), and I think I am in a position to compete this year.

TE has been a weak point for me for years, and I’ve been offered Zach Ertz for Royce Freeman, Sammy Watkins and Jordan Hicks. The Razzball trade analyzer says I’d be getting robbed, but other trade analyzers I have checked out favor the Ertz side. I currently have Herndon, Jordan Reed, and Ian Thomas at TE. My roster would look like this if I did the deal:

Yeah I’m doing that trade, no questions asked, maybe Rudy is fading Ertz, I don’t know what the deal is there.

It seems like his trade analyzer loves Sammy Watkins a lot more than anyone else does LOL.

Thx Rudy! Will there be a ranking page that ranks every position like Baseball has?

For Rudy’s rankings you need a sub I believe

Will Razzball have auction values posted? If so, any idea when? Thanks.

I can talk to Rudy

I have m Thomas.

Would you trade for d Adams a 2nd rd pick?

Otherwise my keeper would be mayfield.
Had a bad season and sold.

Well D day is here and things aren’t exactly looking up for my two keepers Zeke (2) and Gordon (6). Do I stick with them and go for all or Nothing this season or would you replace one today with Mayfield (14)?

Brutal. Just brutal. I have no idea when either will sign. Not a clue. If it’s keeper forever I’d hold onto Zeke and Mayfield. If it’s one year keeper I’d throw Zeke and Gordon back

It is a forever keeper.

I hate losing Gordon, but he’s screwed me with injuries in the playoffs the last 2 years I believe, but he did help get me there and losing him a 6th hurts.

I kinda feel like Zeke is more likely to be back sooner of the two, but who knows. This really blows!!!!