In what could have been a wonderful work of satire in today’s title, last night’s Sunday excursion into Minnesota’s new football stadium may have upended years of programming in thinking that Sam Bradford (22/31, 286 YDS, 9.2 AVG, 2 TD, 121.2 RTG and 1 CAR, -3 YDS) isn’t quite the second coming of Joe Montana, but moreso a cross between Mr. Glass from Unbreakable and Jimmy Clausen. Yeah, an M. Night Shyamalan reference, deal with it. One game won’t change my expertly crafted comparisons, but after beating a team that has basically controlled the division for the last decade, and doing it mostly without Adrian Peterson who did essentially nothing until finally resigning to get injured and leave the game, should say something. I mean, Matt Asiata got more in his first carry this game than Peterson has ran the entire year… And so when we are in the second week of the season, saying that the Vikings front office was onto something by mortgaging a part of their future in a desperate attempt to replace Teddy Bridgewater may be a step too far as of now (since if you whisper “Sam Bradford” into a mirror three times, one of his ACLs will explode.), it is an encouraging start. And before you think that Bradford may not be the lede you were looking for, I think the meta conversation here is that forming conclusions and finding confirmation bias from two weeks of football is probably not wise. And that’s something that should probably be discussed. It matters in the general football sense if you’re, say, a Seahawks fan, but it also matters in fantasy football if you’re, say,  a Todd Gurley owner. When is the right time to panic? To make a move? We’ve only seen about 12% of the season thus far, and to make a baseball reference, that’s game 20. Making waiver moves, exploring trades, probing at what you can do is always a good thing, but my advice here (since I’ve seen a lot of inquiries on this) is to hold for the moment. Or, at the very least, do not sell yourself short. Just wait a bit longer before chugging down the bourbon and gaslighting yourself… one more week, maybe two, before you make any major decisions, and I promise you’ll have a clearer picture and still have enough time left to do something about it.

Ameer Abdullah – 6 CAR, 38 YDS, 6.3 AVG. Ameer Abdullah hurt his foot at the end of a 24-yard run in the second quarter. He almost immediately went to the locker room and was eventually ruled out of the game… Ugh, the Lions loinsing always looks so Lionsly Loinsy, ya know what I’m saying? I know you do.

LeGarrette Blount – 29 CAR, 123 YDS. 4.2 AVG, 1 TD. That’s what I get for playing a New England Patriots player in fantasy despite my better principles. Excuse me while I go take a shower.

Drew Brees – 29/44, 263 YDS, 6.0 AVG, 1 TD, 89.5 RTG. While watching the game, one prominent question kept occupying the valuable real estate market in my head (bullish market, I tell ya!), and that was: Who was going to get their sh*t together first in this game? Drew Brees and the Saints offense… or Drew Brees and the Saints offense? Asking all the right questions here, but not an answer to be found. Much like my life. MUTHA. F*CKING. DEEP.

Jacoby Brissett – 6/9, 92 YDS, 10.2 AVG, 100.2 RTG and 4 CAR, 12 YDS. Welcome to the National Football League, guy who had a bad senior year at North Carolina State! Prepare to hear some racist things if you have growing pains!

Victor Cruz – 4 REC, 91 YDS, 22.8 AVG. Victor Cruz is treats me like my ex used to; He lets me down all the time, but every now and then does something that makes me think he cares.

Kirk Cousins – 28/46, 364 YDS, 7.9 AVG, 1 TD, 1 INT, 84.0 RTG. Quiz time folks! What is a Cousinsception? A) An interception thrown by Washington’s quarterback Kirk Cousins?, or B) Something that occurs often in the deep South and that’s illegal in some states?

Isaiah Crowell – 18 CAR, 133 YDS, 7.4 AVG, 1 TD and 1 REC, 15 YDS. I was surprised that Crowell could actually do something like this (Note: Highlight has sound.), but apparently the Ravens didn’t even notice he was actually a player in the game.

Arian Foster – 3 CAR, 9 YDS, 3.0 AVG. Goddamn it Foster! He did not return to Sunday’s game after suffering a groin injury in the second quarter. But hey, at least it’s not season ending… yet. (That’s probably still a few weeks away.)

Jimmy Garoppolo – 18/27, 234 YDS, 8.7 AVG, 3 TD, 130.8 RTG. Garoppolo had his throwing shoulder smashed into the ground after taking a big hit from Kiko Alonso in the second quarter. It looks to be a sprained AC joint and he’s day-to-day at the moment. (I’d think it’s more week-to-week and the Texans start is a real question mark.) News Flash: New England has just signed free agent quarterback Bom Trady to two-week deal! The one highlight of Garoppolo getting injured will be Belichick getting pressed by some salty reporters throughout the week. Regardless, I think we all know how this quarterback situation will play out: 1. The Patriots will sign Johnny Manziel. 2. Manziel will win the next two games, throwing a total of 14 TD passes. 3. Brady will return from his suspension, the Pats will then trade Manziel to Dallas and Jerry Jones for five first rounders and two seventh rounders. 4. Manziel will never throw another touchdown ever again and those two seventh rounders will be perennial pro-bowlers. Mark it down folks.

Jeremy Hill (11 CAR, 22 YDS, 2.0 AVG and 3 REC, 37 YDS, 12.3 AVG) and Giovani Bernard (5 CAR, 17 YDS, 3.4 AVG, 1 FUM and 9 REC, 100 YDS, 11.1 AVG, 1 TD) – Cincinnati has two starting running backs on their team but unfortunately, both of them suck at the same time, or one sucks and the other does well… never can both have a good game at the same, those are, like, the only possible combinations, and the first one happens more than naught. I feel like this fantasy situation is basically Russian roulette, but with five cylinders in the chamber loaded.

DeSean Jackson – 3 REC, 40 YDS, 13.3 AVG. Cousins missed a few big plays by overthrowing Jackson. I mean, how do you actually overthrow Jackson? Putting too much arm on a throw to D-Jax is like giving Remy Lacroix too much d*ck.

Andre Johnson – 1 REC, 9 YDS, 1 TD. Andre Johnson is still alive. It has been confirmed, all search parties can be called back. Good work everyone.

Case Keenum – 18/30, 239 YDS, 8.0 AVG, 85.3 RTG and 3 CAR, 5 YDS. Keenum led the Rams offense to nine points yesterday, triggering an escalator clause in his contract. Good for him! Also, I have some movie titles that star Keenum… yes, I think about these things, why you askin’? How about Case Worker Keenum: Adventures in Social Work? OR, or… Case Keenum: The Case of the Mysterious Loss of Nine Yards? 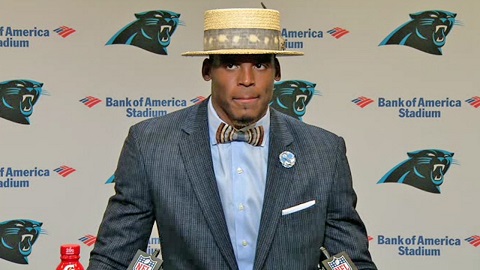 Adrian Peterson – 12 CAR, 19 YDS, 1.6 AVG and 2 REC, 7 YDS, 3.5 AVG. Peterson hopped off the field without putting any weight on his right leg before being helped to the locker room. Replays showed it was a right-ankle injury and he’s currently day-to-day. Man, tough break… I wouldn’t want to be one of Peterson’s kids today. No, actually, I’m sorry. That’s in poor taste. He’d never see them on a weekday.

Eli Rogers – 1 REC, 9 YDS. Pittsburgh. Cincinnati. In the rain. In the dark. Someday we all fade to black. The End.

Ryan Tannehill – 32/45, 389 YDS, 8.6 AVG, 2 TD, 2 INT, 93.7 RTG and 6 CAR, 35 YDS. What a strange team. They stay within striking of distance against a Super Bowl contending team last week and you think, well sure, maybe they’ve changed a bit. And then the Patriots come in and knock them around the entire game, only letting it get close when a third-string quarterback has to take over, and we’re back to the LOLphins. It’s like every season now they start out with tempered, but achievable expectations, show some glimmer of potential, then they are immediately get exposed as a joke of a team that they probably really are.

Jameis Winston – 27/52, 243 YDS, 4.7 AVG, 1 TD, 4 INT, 39.2 RTG and 3 CAR, 9 YDS, 1 FUM. The Cardinals defense was beating up on Jameis Winston pretty much the entire game yesterday. I’d suggest some feminists send them some cookies but I don’t want to be trying to control the tone of the conversation.

Danny Woodhead – 3 CAR, 27 YDS, 9.0 AVG and 1 REC, 4 YDS. He hurt his right knee at the end of a short reception in the first quarter of yesterday’s game and is considered to be a very serious injury at the moment, and his season is in jeopardy most likely… Maaaan, losing Woodhead AND Allen for the season… at this point, just burn the place down and ship the ashes to Los Angeles.

Pete Carroll looks like he just found out that jet fuel doesn’t have the ability to melt steel beams, but soften them just enough to weaken its structural integrity.