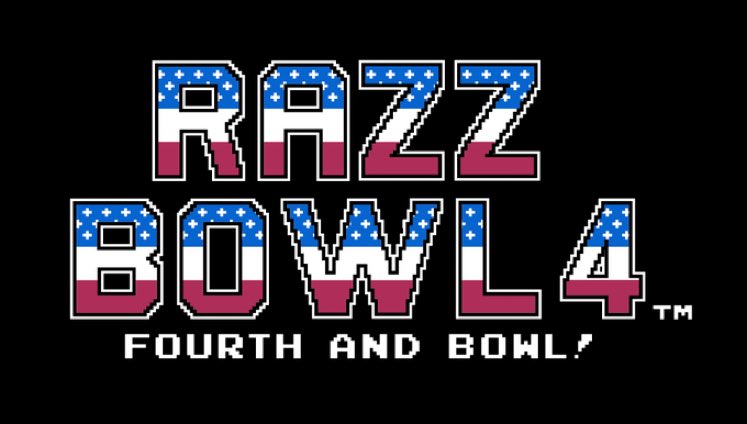 [cue tympani drums followed by John Williams-style brass] Ta dah! It’s the 2022 RazzBowl! This year, we’ve got more Razz than ever, mostly because I’ve been eating nothing but lasagna since we last talked. What have I learned in the past eight months, other than how to order my pants size in “Extra Grande”? Glad you asked! Time for me to enlighten, illuminate, and thrill you to tears with my annual RazzBowl Guidebook!

OK, I assume that you know what the RazzBowl is because A) you read Razzball for the articles and not the shirtless Donkey videos, B) you enjoy playing imaginary football manager with other people from around the world, and C) you probably got suckered in to playing the previous RazzBowls and just can’t stop, can you? Well, this year, you’re gonna win! Or, at least finish in the top 50%. Just so we’re on the same sheaf of papyrus, let’s cover the RazzBowl basics.

The RazzBowl is scored as a cutline best ball with 6 points per QB touchdown. Best ball means you draft a bunch of players and the computer will set the lineups for you based on the highest scoring players at each position. Cutline means [checks notes] we kick you out of the competition if you suck. Wait. [reads fine print] Oh, you get relegated to a wild card tier after something like 11 weeks if your team is struggling. Wild card teams then do a Hunger Games-style competition to get back in the Championship Tier. May the odds be ever in your favor!

Also, you definitely want to buy a RazzBowl shirt. Half my wardrobe is RotoWear shirts and I intend to give them to my grandchildren as evidence of my coolness level when I was [checks age] old enough to remember The Police on tour. 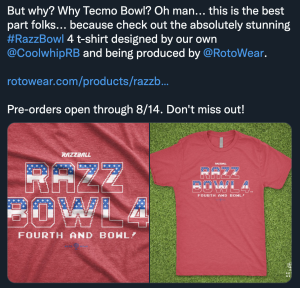 Is it deja vú, or have you read all this before? This will be my third RazzBowl Guidebook, and they’re all freaking spectacular if I say so myself. If you’re waiting on your copy of 11/22/63 to be available from your library, may I recommend some reading in the meantime? Here are our previous RazzBowl Guidebooks and related reading for your beach reading pleasure:

Still need more guidance? You’re in the right place! Help yourself to the complimentary circus peanuts while I cram your sweet little head full of knowledge.

How To Win at RazzBowl (and do other things good too)

First and foremost and if you don’t agree with this I’ll tell you to shut up: the teams that perform the best in the RazzBowl are balanced teams that lean towards a Robust RB construction. What does that mean? Let me grab my sidearm and make some bullet points for you:

Our 2019 RazzBowl winner, Mike Beers of RotoViz, stole the competition behind a Robust RB build. Our 2020 RazzBowl winner, Jerry Janiga, took 2 RB in the first three rounds and drafted a balanced team by round 7. The 2021 RazzBowl winner, Robert Goldman, started with a Jonathan Taylor/Najee Harris combo, and he balanced his team with QB, WR, and TE by round 9. The 2022 RazzBowl Qualifier champ (same scoring settings as the Main Event) — the cockily-named RotoRooster —  won with a Hero RB draft (Joe Mixon in round 2). However, Deebo Samuel’s surprise 8 rushing TDs from his 7th round draft spot definitely helped. Ultimately, RotoRooster had 4 RB (not including Deebo) and a TE by round 11 to go with 6 WR.

Want some extra credit? The 2021 Underdog Best Ball Mania $1 million winner also started RB/RB to start (Jonathan Taylor/Aaron Jones), grabbed his QB in round 5, and had balanced his roster by grabbing a TE by round 9. Oh, you’ll notice the $250K winner of Underdog’s smaller “Puppy” competition also started RB/RB.

The lesson? I’ve said it every single freaking year, and I’ll say it again: There’s no evidence that true Zero RB teams succeed in the RazzBowl. Seriously. I’m not making this shizz up. Zero RB might be a fine contrarian play if you’re playing in 50-60 leagues. But for the rest of y’all that just wanna have fun with the celebrity drafters? Your best odds are to Hero RB or RB/RB.

Still, about 40% of you are going to try to draft a Zero RB team (defined as 0 RB in the first 5 rounds). That’s fine. You do you. Maybe this is your year! Odds are — it’s not your year, and you’re just letting the sharps in the room get an advantage on their next RB.

Let’s compare the opening moves from the winners of the 2021 NFC Cutline Championship, RazzBowl Main Event, and RazzBowl Qualifier:

First takeaway: Draft at least one workhorse RB in the first two rounds. Second takeaway: Spicy Shrimp and Rice, please. Third takeaway: There are many colors to the championship rainbow. Among the three championship teams, there are only two common players to their starts: Joe Mixon and Cooper Kupp. Just think about all the combinations out there that can produce a champion.

But probably the fourth, and most important takeaway, is this: You need to identify and draft your league winner. Jonathan Taylor topped many RB boards last year, including Donkey Teeth’s 2021 Rankings. Cooper Kupp was similarly a top-projected wideout — the guy had two 90+ reception seasons under his belt already — and he seemed a logical choice for a WR2.

So! Who could be some RazzBowl league winners to target in 2022? Let’s peer into the 2022 Razzball Fantasy Football Rankings to find our best ballers.

D’Andre Swift: The Swifter is cleaning up in Rudy’s 2022 Preseason RB rankings, landing at RB7. Bobby LaMarco ranked Swift as his RB5 on the year, noting the improved offensive line in Detroit. Swift has struggled to play a full season so far, but he’s relatively young (23) and is projected to get the second-highest team target share in the NFL. If Swift can pull off 15+ games in 2022, we could be looking at 1300+ all-purpose yards and 70+ receptions. With Swift’s ADP landing, on average, in the late first to early second rounds, a healthy 2022 from the third-year running back could win a lot of leagues. Personally, I would love a Dalvin Cook/D’Andre Swift start from the 10 spot.

Deebo Samuel: His ADP of 16th overall is a bit rich for my taste, but Samuel could pay Dee-bee-dends. I have a lot of interest in that! Hah! I laugh at my own jokes so you don’t have to. Could Samuel rush for another 8 TDs in 2022? I wish fantasy football was like fantasy basketball, and sites abandoned “RB/WR” designations and let players be position free. D’Andre Swift will likely get more receptions than 60% of receivers, and Deebo Samuel will likely rush for more yards than 60% of running backs. ENYWHEY. Deebo Samuel’s draft range on NFC is insane, going anywhere from 6th overall to 40th overall. I would be ecstatic to find Deebo on the board after pick 25. Imagine picking, like, 6th overall, and you start Najee Harris / Travis Kelce / Deebo Samuel. Whew, I’m going to need a Capri Sun to cool down now.

Trey Lance: Boy howdy, if you think I am an aggressive ranker (rawr!), then sit down and listen as I tell you that Rudy “Pets.com” Gamble has placed #3 Lance as his QB8 on the season. Now, that would be an awful finish for a racehorse. But lucky for you, stud — Lance is a quarterback! So here’s the deal. On NFC right now, Lance is more or less the consensus QB13-QB15. That means: in a 12-team league (i.e. the RazzBowl), every team will have rostered 1 QB. But you! You’re brave and you believe in Rudy and his magic and his weird infatuation with David Blaine videos. You’re actually waiting to draft your first QB because you’re going to take Trey Lance. While other suckers are taking Josh Allen with pick 15, you’re waiting until pick 100 — that’s like 10 rounds! — to take Trey Lance and pair him with somebody like Derek Carr. Myself, I don’t really believe Lance is QB8-worthy. But you? You’re bold. You look good in a 2XL novelty fantasy football shirt. You’re drafting Trey Lance, aren’t you?

Michael Pittman: If you thought Deebo’s ADP was wild, just wait until you hear that Michael Pittman — WR14 on average by NFC ADP — has lasted until pick 97 in a draft this year. Like, these stunning “max picks” never happen to me. I never get this lucky. You know who got lucky in the first RazzBowl? Mike Beers getting a near-max pick on Dalvin Cook at the end of round 2. But you!  You’re looking at Rudy’s WR8 — that’s Michael Pittman bee-tee-dubya — and you’re drafting him as your WR2. Or if you’re in one of those dumb people leagues…your WR3. Imagine everything going right for you and following up that Najee Harris / Travis Kelce / Deebo Samuel start with Michael Pittman. [angels sing from on high].

David Montgomery: OK, so you got a sweet group of WR to start, but you need that RB2 with upside, right? David Montgomery enters the practice field. Monty is currently RB20 by ADP, but his minimum pick on NFC is “higher” than even guys like Josh Jacobs. Nobody likes Frankengomery — he’s the running back you “fall back on.” But that’s fine. Montgomery missed 40% of 2021 and still finished as RB20. Like, that’s great. He’s not the monster-up-the-middle rusher that you want in the first round, but he’s a great RB2 for Hero RB builds or your 3rd RB for Robust RB builds. He is not your Zero RB back; let’s just make that clear. Monty is Rudy’s RB13 on the year, and that’s a ton of value to build your RazzBowl squad.

Let’s hear it down in the comments! What do you want to know about the RazzBowl? Who are you drafting with? Why are you still thinking about a Zero RB build after everything I wrote? I’ll catch everybody on Mondays here in the pre-season read my pitching breakdowns on baseball and then have a football snack for dessert!

Of course I get 12th pick in my league hahaha being Grimey never fails!