Now we’re getting to the meat and potatoes of the fantasy rankings, perfect for the protein-starch diet which has netted me zero results. While last week’s ranking extravaganza with an opening salvo of kickers and defense was such a memorable experience, in that, it wasn’t, this week, we start getting serious. But not too serious, because we are talking about tight ends, more specifically, our tight ends, which probably needs less pants. Why? Because everything needs less pants. Think about it.

Jimmy Graham, TE or WR?: While his position can be described as “hybrid-like”, just like your mom, for fantasy purposes, a positional title change could cause a dynamic-synergistic shift, something only thought to exist in the corporate world. As a tight end, there’s no doubt he is king among men. This isn’t Game of Thrones, so good for him, he should be around for a while. However, if Jimmy Graham gets classified as a receiver, then his value takes a hit. Last season, he had 86 catches for 1,215 yards and 16 touchdowns. That’s three more receptions than Tony Gonzalez, 298 yards more than Jordan Cameron, and three more touchdowns than Vernon Davis. Pretty awesome-saucem’, right? Because sauce. Now, as a wide receiver, that would place him at 12th in receptions, 15th in yards, and 1st in touchdowns. Very good. But not sauce good. Maybe a scrumptious dressing. I don’t know, I’m hungry I guess. He’s probably a top-10 wide receiver, and somewhere between the Julio Jones and Brandon Marshall area seems proper. Not that I think we’ll have to prepare for something like this. The craziest I can see happening is probably a WR/TE flex handle, which really just provides roster flexibility. And maybe a walrus doing the moonwalk. That also seems pretty crazy.

Coaches and their tight ends. (HAHA, get it? Just a reminder, this is free content.): Norv Turner and Gary Kubiak are very tight end friendly, just like me (tight ends… the gift that keeps giving), and, so, naturally, both Kyle Rudolph and Dennis Pitta should see plenty of targets and ultimately, in Rudolph’s case, rebuild some of that value he lost last season, and in Pitta’s case, build on his potential via a clean bill of health and Joe Flacco‘s elite check-downs.

Charging you twice: The simple fact is, Ladarius Green will be an impact player at the tight end position. See how easy that was? Too easy. Let me complicate it a bit, ’cause that’s how I roll. Indiana knows what’s up, it’s how they get to most places. While Green will be an impact player, I still feel like there will be a production ceiling, if you will. And you should. While the flashes we saw last year were more than enough to get our salivary gland’s doing their thing, there’s still Antonio Gates. And while I can’t wait to read about how he’s in the best shape of his life for the third straight off-season, there’s something to be said about Philip River‘s comfort level with Gates. I’m giving the nod to Green, since Gates will most likely fade a bit as the season progresses, but I think the elite numbers will arrive in 2015 for Ladarius Green, with a productive, if not limited 2014.

It Ertz when I Gronk: Makes total sense. No it doesn’t. Yes, I’m down on Gronk. He obviously has the ability to be the number two overall tight end, and could very well be that this season. But I have no idea what’s going on with his body, except when he poses in pictures with hot chicks. That bodily function, I totally understand. But his explosive ACL’s and MCL’s and whatever other computer networking certification his body wants to get has really soured me on him. And you don’t know the sweet unless you know the sour. Something-something, wax poetic. As for Zach Ertz, he’s white, and can catch, which means Chip Kelly will innovate him a very nice season.

Greg Olsen… really?: I could have been thinking of Elizabeth Olsen with this ranking. Maybe. 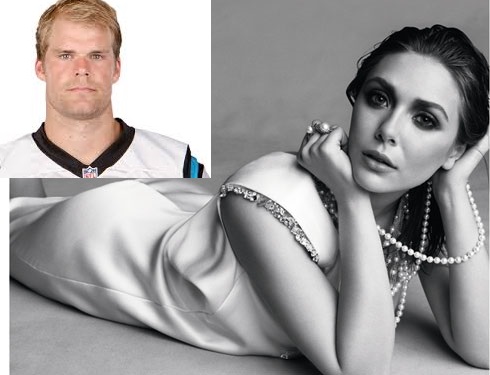