So this week’s strategery has a new format to completely disorient and befuddle you! The first change is that I have added DVOA, which is a system developed by Football Outsiders to measure the true value of a defense.  I like it to help offset the fantasy football points allowed to QBs/RBs which is easily skewed.  As a whole I believe these four statistics; yards allowed per game, fantasy points allowed, yards given up per attempt, and DVOA help average these defenses into a ranking I feel comfortable with.  The good thing with this chart is you can see each individual statistic and ranking if you like one more than another.

I have also changed it so the top of the chart has the worst defenses and the bottom the best.  So as you can see in the first row of the passing defensive chart Tennessee ranks 32nd in yards per game, 32nd in fantasy points, and so on and on.  And then you take a look at their opponent, Jacksonville, and you can feel pretty good about playing Sims-Walker and Garrard.  So the teams on the far left column are the defenses and then just right of them are the offenses with your fantasy players hidden in there somewhere.

Take a look and if you have any questions be sure to ask! 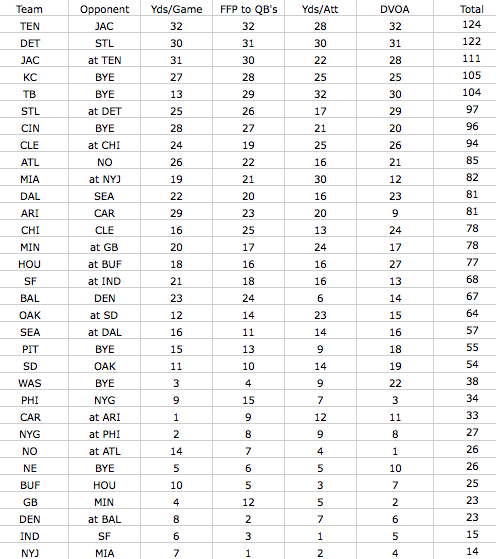 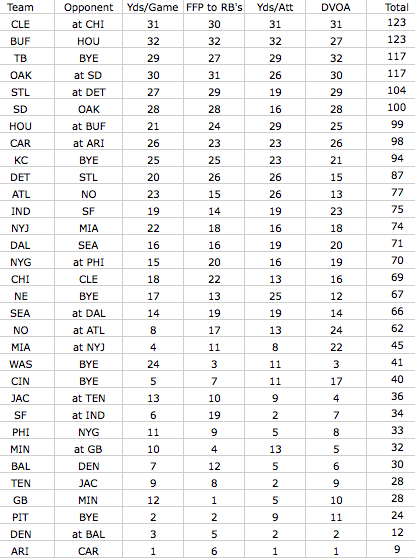