When it comes to fantasy football, one of the hardest positions to predict is also one of the most coveted positions; the almighty wide receiver. There’s no better feeling than going into a matchup with an elite receiver who you can depend on for the targets, his hands, and his ability to make the big plays.

I want to highlight some of the very favorable matchups this week for our passers and receivers. Looking at this chart, I do see some numbers that conflict with my gut feelings about their secondary’s ability to stop the pass. Obviously the offseason has impacted some teams more than others as well as week 1 performances, both positively and negatively. For example, Philadelphia’s pass game last season was somewhere near the bottom 3, and now they moved all the way up to spot #21 due to a phenomenal Week 1 against a dismal STL passing game and not to mention the CBs they grabbed in free agency. So, take these stats with a grain of salt, but also know that there is some validity to them. If you know how to read these charts, they will really become beneficial to your fantasy choices especially as the season progresses.

So, enough of my rambling, let’s get to the good stuff. Who do we think is going to show up this week besides your studs that you almost have to start? Let’s take a look… 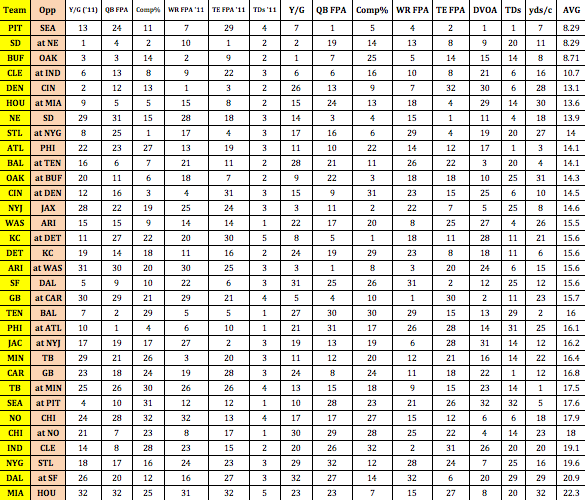 Johnny Knox vs. NO

All and all, this matchup could rival the blow outs we saw last week in the NO vs. GB and NE vs. MIA. We’ve got the ultra accurate Brees against the big arm of Jay Cutler. I expect Cutler to make some poor decisions, but I also expect him to take some plays out of Green Bay’s playbook and exploit NO’s inexperienced cornerback Patrick Robinson. Knox seems to be out playing Roy Williams and he definitely has the trust of Cutler. I’ve been waiting for Knox to break out and this very well could be the week he does.

I completely agree with “The Fantasy Football Backup Plan: Week 2” article in that Colt McCoy is almost worth the look every week with the numbers that he has been putting up. That being said, he clearly has faith in his tight ends Watson and Moore who combined for 6 catches, 80 yds, and 2 TDs. I favor Watson somewhat more than Moore because he is the starter, fist of all, and second, he is more experienced. If one of these guys is injured, then give the nod to the one starting as they will be McCoy’s first look in the red zone.

Wow, if you had told me 6 months ago that Plaxico would come out in his first NFL game after 21 months in prison and put on a show like he’s never missed a beat, I would have laughed in your face. But believe me, this guy is playing like he’s got something to prove and he’s got the assets and abilities to do so. If anyone saw the Kenny Britt show against Jacksonville last week, you know what kind of upside this matchup has.

Like the Run Defense Strategy, I want to include some interpretation on some matchups that could end up being an elite receiver’s kryptonite. There is always the possibility of facing a shut down corner that will turn your man love into a deep, deep hatred of your WR1. As always, I am not telling you to bench your WR1, because after all, they are a number 1 for a reason and always have the capability of beating the press, but I am simply warning you! So don’t blame me if it happens and you read this and didn’t take notes…

I almost feel like the Fantasy God’s are condemning me right now as I write this about one of the highest ranked and all around best WR in the National Football League today. Now, before you start casting your stones, just hear me out. Last week, Chicago poured the pressure on Matt Ryan and never stopped. This held Roddy out of the end zone and although he caught 8 passes, he only compiled 61 yards. With the upgrades to the secondary that Andy Reid made in the offseason, expect Roddy to have a tough going this week.  He may be one of the most cover-proof receivers in the league, but if he has any down game, this one could definitely be it.

This caution flag is certainly debatable since Williams has the physical attributes to challenge any cornerback in the red zone. However, last week against San Diego, the Vikings were able to hold Floyd and V Jax to a combined 5 catches for 76 yds and forced Rivers to take the check downs to get into the end zone. When it comes down to it, the Vikings are going to put a very aggressive and hard-hitting Antoine Winfield all over Williams in hopes of taking away Freeman’s number 1 target.

Team: The team that is being evaluated for their defensive strength

Y/G: Total passing yards given up per game

Average: The average of each each individual ranking