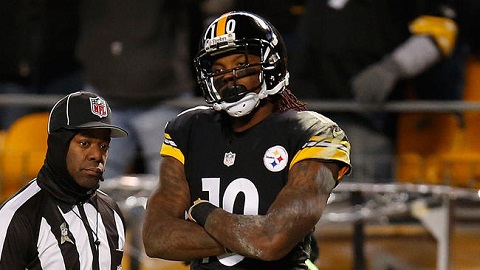 Welcome Razzball football readers to the offseason. I know some of you are going “what’s an offseason?” as your significant other rolls there eyes. Since there is no such thing as an “offseason”, I am here to fill that void for you. I am bringing you a series that’s going to take a look back at last year and beyond to help identify value and non-value players for next season. I don’t want to say it’s a “new” series as if you remember last year. I did a similar thing for Dase’s Digest with players such as Carson Palmer (nailed it!), Jonathan Stewart (nailed it!) and Teddy Bridgwater (did I mention how I really nailed it for Carson Palmer?). The difference with this offseason is that I have a full and thick beard… that and I’m not talking about 2015. So as I stroke my beard, it’s on to 2016 and the third player up is Martavis Bryant.

Let’s take a quick look at the final numbers for Bryant in 2015… He played in 11 games, caught 50 passes (92 targets) for 765 yards and seven total touchdowns. These numbers placed Bryant as the 33rd best wide receiver in standard ESPN scoring.

After missing the first five games (four of them due to suspension), Bryant made those fantasy owners who drafted and stashed him away look very smart. From weeks six through 15 (nine games), he produced 5.3 catches, 84.3 receiving yards, .8 total total touchdown and 9.6 targets per game. These numbers come out to 112 total fantasy points! That’s 12 fantasy points per game. It would put him as the seventh best wide receiver on a per game basis. He had five games with no less then 11 fantasy points and seven games with no fewer then eight fantasy points. In standard (non-ppr) formats, it’s so huge to have players that find the end zone. It felt like Bryant was doing that week in and week out. He hit pay dirt in six of his first nine games. One last key stat was the fact he had at least eight targets in everyone of these games. His best game was in his first game back in week six vs the Arizona Cardinals. In this game, he saw eight targets and turned that into six catches, for 137 yards and two touchdowns. These numbers produced 25 (he had two games of 21+) fantasy points and the number two spot among his peers (and a tied for sixth among all players/teams)!

In his first two seasons, he has played in 24 games (regular/postseason) and has scored 17 total touchdowns (.7 per game). His stat line is 4 catches, 65 receiving yards, with .7 total touchdowns on 6.6 targets per game. These per game numbers come out to 270 total fantasy points. On a per game basis that is 11 fantasy points and good enough for ninth best among all wide receivers.

Right now, Bryant has an average draft position in round three, around pick 10 as the 19th wide receiver off the board. I’m baffled at this but at the same time it benefits myself and all the Razzball fans. This allows us to not be one tracked mind to start our drafts. We know that if we start out with two running backs or say Rob Gronkowski and a running back, we can feel comfortable knowing that a player with a track record of WR1 production will be on the board for us in the third round.