There was a time when I thought babies were delivered by storks. Fake news! Cartoons are dangerous man. Then when I “matured”, I thought making babies was as simple as wham, bam, welcome to the fam. It ain’t that easy, though. When my wife and I decided to start a family, man….talk about an extensive game plan. Ovulation schedules. Positions. Plenty of reps. It took us over two years for our second! There are two things I took from the baby making experiences. One, women are freaking amazing, and strong, and wonderful, and….Did I say amazing? Two, there are so many things out of our control, so all we can do is put ourselves in the best position to succeed. Both things correlate well for fantasy sports. My wife is amazing for allowing me to spend countless hours on a fake game based on a game, and we don’t directly determine how many touchdowns a player scores a game, but what we can do is swing the odds in our favor. Cam Akers of the Los Angeles Rams is being drafted as the 25th running back and 52nd overall player in NFFC drafts from July 1 to August 9th. Can he be that player who tilts fantasy leagues this season?

Akers is 21 years old, 5′ 10″, and 217 pounds. He was the Mississippi Gatorade Player of the Year in high school, a five-star recruit, and one of the top players of his class. He played college ball at Florida State, where he performed admirably in adverse conditions, and was subsequently selected by the Rams in Round 2 of the 2020 NFL Draft. His PlayerProfiler page is impressive: 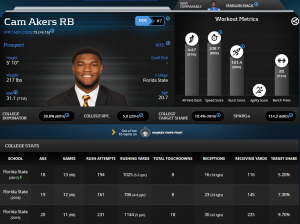 So why is Akers being selected as the 25th running back off the board? There’s the porous offensive line and potential for a committe situation. Let’s address each.

The Rams offensive line is downright offensive. PFF had the Rams as the 31st-ranked unit last season. The team didn’t address the position in either the draft or free agency, so they will continue to be bad. There’s no sugar coating it. With that said, there is youth and another year of experience could foster development and improvement. PFF has the unit 25th entering the 2020 season.

With that said, even with one of the poorest offensive lines in the league, Todd Gurley was able to rush 223 times for 857 yards and score 12 touchdowns! Gurley had the third-most carries (51) from inside the 20, the fifth-most (29) inside the 10, and the 10th-most inside the five. There are going to be plenty of opportunites to score on a Rams offense that was 11th in points per game and 7th in yards per game. In addition, Akers is no stranger to running behind a porous offensive line, as PFF ranked the FSU offensive line as 209th in rushing yards before contact per attempt (1.2).

Back in July, Sean McVay hinted at the possibility of a RBBC.

“I think it’ll just naturally work itself out. I think if you look at that success San Fran had last year with that running back-by-committe approach,” McVay said, via Cameron DaSilva of The Rams Wire. “What I thought Kyle (Shanahan) and their players did a great job of is, ‘Hey, we’re going to have an open-mind approach, we’re going to be committed to trying to have some balance and then we’ll go with the hot hand or whoever really expresses himself as deserving of the carries.” (courtesy of NFL.com)

The key phrase is “it’ll just naturally work itself out.” If we look at McVay’s history as both an offensive coordinator and head coach, we can discern a trend.

In 2015, the Redskins drafted Matt Jones in the third round of the NFL draft. As a result, he split carries with Alfred Morris. Outside of 2015 and 2016, McVay-led offenses have primarily operated with one guy garnering the majority of the carries. Remember that the Rams just spent a second-round pick on Akers.

Last season, the Rams drafted Darrell Henderson in the 3rd round of the 2019 NFL draft. Here’s the thing, though. He was comfortable running in a gap scheme. As J. Moyer wrote, in a gap run scheme, the “back is told where to go, minimizing the reliance on vision, processing of post-snap change, lateral agility and controlled footwork.” The Rams rushing attack is built on Wide Zone and Duo. Both plays “emphasize the runner’s vision, scheme awareness, processing of post-snap changes, lateral agility, and controlled footwork.” Henderson has likely improved with the reps from last season, but the Rams went out and selected Akers with significant draft capital. That speaks more than any offseason fluff from the coaches.

According to PFF, the Rams utilized zone-based runs 724 times since McVay has been the head coach, which is the sixth-highest rate in the NFL. Akers ran 231 times in a zone scheme last season, the 16th-most in college football.

Akers is also not a zero in the receiving department, as he had 30 receptions for 225 yards and 4 touchdowns last season at FSU. Gurley had 49 targets last season, but when healthy, was getting over 80 targets per season. There’s upside in that department for Akers.

Yes, there’s unknown with Akers considering he’s a rookie and the situation is a bit muddled, but that’s factored into his draft cost. The upside is immense. Let’s not forget that Gurley finished as the 14th running back in PPR scoring last season. I don’t have one Akers share so far this season, and that makes me sad. In any subsequent drafts, I’m going to make sure I get as many as I can.

Tell me when summer break starts because I just got schooled. Nice work, Son!

Thanks, Doc! You just learned that babies don’t come from storks too?