Folks… We made it. We have NFL Sunday from this weekend until January 25th. I can hardly wait for the kickoff octo-box and the soothing sounds of Scott Hanson’s voice to touch my ear drums. In preparation for this glorious moment, I give to you the second part of our week 1 NFL data evaluation. If you are just starting your week 1 prep, I recommend going back to the first article to review the Thursday night and early slate games.

The Chargers have a mediocre offensive line that allowed pressure on 32.4% of dropbacks in 2018. They have lost arguably their best player in Russell Okung to a pulmonary embolism. The Colts were not an extremely effective pass rush in 2018, finishing in the back half of the league in pressures per snap. They added Justin Houston who should improve that pass rush. Phillip Rivers is a savvy quarterback, and it should be expected that he will find a way to counteract the pass rush throughout the 2019 NFL season. I anticipate this will be by increasing targets to lower ADOT wide receivers. Mike Williams with a 14.3 ADOT may see a decrease in targets until Okung is back and the line is at full strength.

One of the most important early season units to keep an eye on is the Seattle Seahawks defense. They finished 2018 14th in total defensive DVOA and finished as one of the ten worst units at generating pressure on a per snap basis. They traded away Frank Clark but plugged up the pass rushing gap by adding Jadeveon Clowney via trade. However, without any other impact additions, barring a Ziggy Ansah bounce back, this defense might be slightly overrated. It is perceived to be elite, but it might be covered up by the coaching abilities of Pete Carroll. I’ll be intrigued to see if the Bengals can have success in week 1 on the road moving the football.

In 2018 Dak Prescott had a perfect passer rating when targeting the deep middle of the field. The Giants will be running out a new safety tandem in Antoine Bethea and Jabrill Peppers. It is yet to be seen if the tandem will work together but expect the Cowboys to attempt to find out. Both players are certainly downgrades from Landon Collins. Michael Gallup would stand to benefit the most from a few deep shots, as he had a 13.9 ADOT in 2018. The Cowboys may lean slightly pass heavy with less Zeke, and the team doesn’t have another receiver with an ADOT over 10 expecting regular snaps. 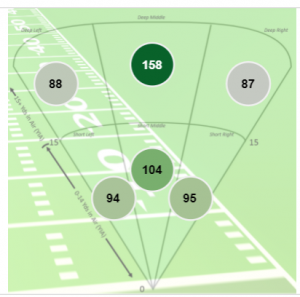 The Cardinals secondary is in for a rough start to the seasons. Just how bad? Patrick Peterson is one of the top cornerbacks in the NFL and will be suspended for the first 6 games. The Cardinals signed Robert Alford this offseason to start opposite of him when healthy. Robert Alford was the worst qualifying cornerback in terms of success rate when targeted in 2018. Only 35% of the plays in which he was in primary coverage failed to be defined as a “successful” offensive play. Robert Alford broke his leg during the pre-season and will be out for most if not all of 2019. The Cardinals are going to start backups to Alford against Kenny Golladay and Marvin Jones. It is possible that this could be the worst secondary in the NFL until Peterson gets back. The Lions passing game is undervalued in all formats for week 1.

Chris Godwin has been one of fantasy footballs most talked about breakouts for 2019, as he will be running the “big slot” role in Bruce Arians vertical passing game. His week 1 slot matchup in K’Waun Williams is vulnerable, with a caveat. Williams success rate when targeted was one of the 20 worst in the NFL in 2018, but his average air yards of passes intended was only 7.7, a very low total. If Arians embraces this data we may see less vertical shots to Godwin in week 1 with a higher reception total. Bucs stacks will be popular in DFS, but if Godwin isn’t targeted deep the ownership might not be justified, unless the volume is substantial. As an additional note, the 49ers Richard Sherman was one of the top cornerbacks in the NFL in 2018, but was not asked to shadow. The 49ers secondary may have more success than anticipated and players can gain some leverage on the field if the Bucs stacks fail in week 1.

The New England Patriots are known to use a bend, but don’t break, defensive strategy. They play conservatively between the 20s, and attempt to hold teams in the red zone. A vital component to this strategy is leaning towards defending the pass rather than stopping the run and limiting explosive plays. This is a functional strategy against rushing attacks when playing average teams. However, in 2018 the Patriots were gashed on the ground against elite offensive lines giving up 150+ rushing yards to the Lions, Steelers, and Titans. The Patriots lost all 3 of those games. It is noteworthy that all 3 of those games were on the road.

This is a data cocktail resulting in a great scenario for Will Fuller. In 2018, teams targeted the Saints deeper than 11+ air yards on 27% of passes. The league average was 23%. They were lower than league average in deep attempts against in 2016 and 2017. What changed? Kenny Vaccaro left to join the Titans in free agency. Immediately afterwards the effectiveness of Marshon Lattimore, and the entire Saints secondary dropped. Deshaun Watson targeted receivers deeper than 11+ yards on 24.9% of passes attempted. The league average was 22.3% of the time. With the potential high scoring nature of this game Will Fuller’s likelihood of extra deep targets is high.

A big hindrance on Derek Carr’s career has been the inability to recognize and diagnose how to handle pressure. Throughout his career he has been an average to above-average NFL passer when kept clean, and one of the worst when pressured. In 2018 his passer rating when clean was 104.8, but when pressured that rating sunk to 58.1. Carr snagged his current contract coming off of great seasons in which the Raiders had one of the premier offensive lines in the NFL. The Raiders have made upgrades along the line in the 2019 offseason. Their week 1 opponent is assumed to have a feared pass rush, but the 2018 statistics tell a different story. The Broncos finished 17th in pressure rate on defense in 2018 and didn’t add any significant pass rush personnel this offseason. The Broncos did hire Vic Fangio who led the Chicago Bears to a top tier defensive finish in 2018, but Fangio’s Bears defenses never finished in the top 12 in pressures from 2015-2017. He relies on interchangeable pieces in the second level and secondary to create confusion but doesn’t rush more than 4 defenders at a high rate. Expect the Raiders to be able to handle the rush in week 1 at home.