The ESPN Fantasy Football Championships may be just a bit of a misnomer since anybody with ten bucks and an April cheat sheet can walk through the door unmolested.  There was some interesting info from John Clayton, Stephania Bell, and Mr. Matthew Berry, but mostly I was sitting there adding apps to my iphone. 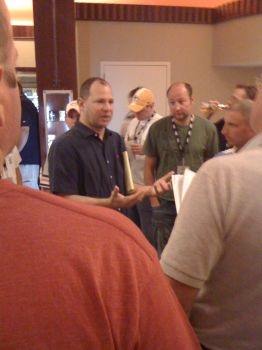 "And Winslow was there too."

Coach Ditka was supposed to be there to import some of his fantasy knowledge, but his plane went down in flames, oh wait, let me check my notes.  No, his plane was late, which means he was passed out in a hotel room somewhere.  Ditka and fantasy advice don’t go together anyway.  Ditka and “coherent sentence” don’t really go together either, but that’s neither here nor there.  After Ditka bailed we broke up into groups to draft. 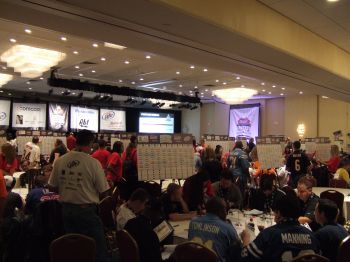 What 500 men with nothing better to do on a Saturday morning look like.

As you can see LT and Peyton drafted together.  When I asked each for their autograph they were extremely rude.  Don’t pick them this year. Also, Cutler was drunk and belligerent.

So there were around forty 10 team leagues and the overall winner gets five grand and a trip to the desert.  My league was a mixture of novices and what seemed to be seasoned players.  There were some odd and downright bad picks and a few good ones.  I was a bit thrown by some of the picks and got scared and hid under the table.

10. RB: Steven Jackson — I’ve been a little down on my man SJax lately, but at #10 he was a steal.  I was getting a little giddy when MJD lasted until #7!  I knew things were going to get a bit wacky at that point.

11. RB: Chris Johnson — CJ was a no-brainer in round 2.  I knew this would make WR’s a little tougher to get, and Randy Moss was just sitting there all alone like the nerdy girl with glasses in one of those teen movies where everyone in the theater knows she’s hot but for some reason the people in the movie are completely oblivious.

30. WR: Steve Smith — I don’t like Smith that much, but he was the best left on the board.  I wanted to just grab 2 WR’s at this point, but AGonz was next on my list and I had a hunch that my league mates might let him slip back to me so I went with my man crush next.

31. FLEX: Ronnie Brown — Hey, I know I’m going out on a limb touting Brown as much as I have.  He will lose some carries to Williams and he has his injury history.  He is a bit of boom or bust, but I love his boom, and not his bust.

50. WR: Anthony Gonzalez — So someone took Tony Gonzalez and I thought I heard him say Sir Gonzo the 2nd, but thankfully he dropped to me.  My other man-crushinator isn’t my ideal #2, but I am happy I got him at #50.

51. QB: Donovan McNabb — I continue to make the same mistake with QB’s.  Rivers and Rodgers were gone and I was worried McNabb or Schaub wouldn’t get back to me at 70, but I should have known Schaub would have made it, and he would have. For as much as I preach not to grab QB’s early I always seem to get an itchy trigger finger.  If only my man Sage was around.  We could have a shootout!

71. Bench: Hines Ward — We have Hines ranked higher than others, but I still see him as the clear #1 in Pittsburgh and I wanted a consistent backup to Smith.  And his smile is just so contagious, not like the swine though.

90. Bench: Matt Schaub — I just couldn’t pass on him.  I like having a good backup QB and I could see him surpassing McNabb. And weirdly this league doesn’t allow trades because they are afraid of cheating so I felt a good backup QB was essential.

110. Bench: Leon Washington — I will dub thee LDub and you shall surpass Tom Jones in touches and I decree that when this happens all shall bow to The Razzballian!

111. TE: Zach Miller — I could have waited on Miller, but I like him quite a bit and I didn’t see anyone else on the board that just had to be taken, and the tight end hole needed to be filled.  (ok, ok)

130. Bench: Jerious Norwood —  I think Norwood will get more touches this year to spell Turner and if Turner goes down to the gypsy curse of 370 JerNor (no?) will be awesome in that offense.

131. Defense: San Diego — I’d like Sproles to return a TD or two and Merriman and company to get some sacks and interceptions.  Thank you.

150. Bench: Lauverneous Coles — He was the best left on the board.  He’s a possession receiver and when you think possession you think Bengals.

151. Kicker: Adam Vinateiri — Colts are going to score a lot.  At least I’ll get all those PATs, that’s that.