Kurt Warner and Matt Schaub have schedules that fantasy footballers would have trouble drawing up for themselves. Matt Ryan and Tony Romo have schedules that only troubled fantasy footballers would draw up for themselves.  If I could get Schaub or even old man Warner for the playoff run I would.  These numbers are against QB’s, but work for WR’s as well.  Let’s just say AJ and Fitz might be ok.

Hopefully this chart will give you a gauge to make some last second trades.  If you have any questions about the numbers toss them in the comments. 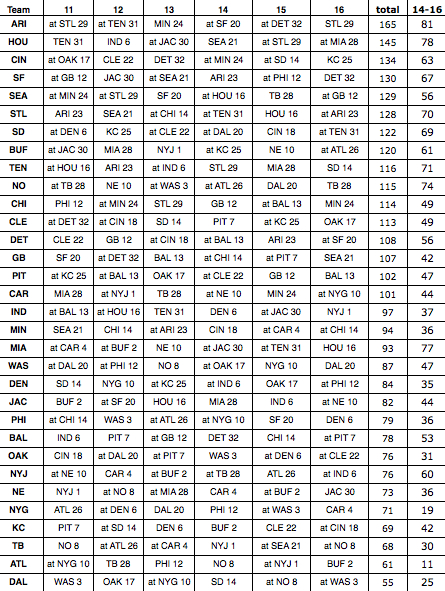 After the break you’ll see the same chart, but in order of best playoff schedule for QB’s week 14-16.

If Chad Henne wasn’t a rookie with not much in the way of wide receivers I’d say take a chance on him for his playoff schedule, but he is and he doesn’t. Of course our old standbys Warner and Schaub are still at the top, but Eli Manning falls a little further and has a tough playoff schedule.  I really wouldn’t want to rely on him to get me to a championship this year. 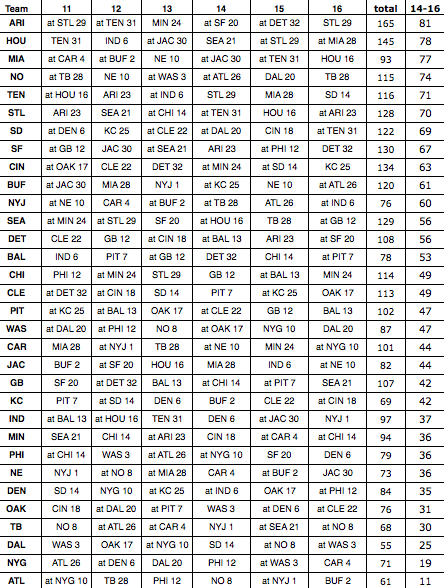