So who do you want leading your fantasy team to glory this week? Ah, who cares.  Play all your Thanksgiving players; you know you wanna! Thankfully if you have some Packers you should give thanks for the Detroit Lions ineptitude on defense. Think of Ford Field as the New World and the Lions as the Native Americans and the Packers as the colonizers.  You might have mixed feelings about that metaphor, but I doubt you’ll feel too bad about starting your Packers! There are some easy matchups tomorrow, but you never know when your Aaron Rodgers will metamorphize into General Custer. Ok, I’ve been reading too much Sherman Alexie. Here are your matchups against passing defenses.  I added one wrinkle and instead of looking at fantasy points given up to quarterbacks for the year I’ve gone with just the last five weeks.  I wanted to Febreeze the stats a little without actually taking them to the cleaners.

I’ll have the rushing stats either up later tonight or tomorrow morning.  You know, I have to give thanks for stuff too! 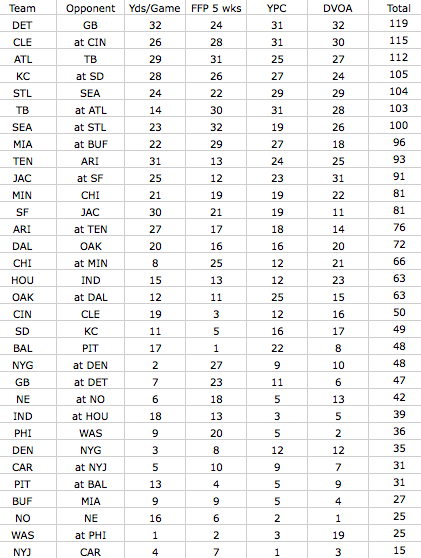