Good god, what was that?

In what, dare I say, was a pretty good football game for a majority of the time (let’s just agree to not include a very morose and slug-paced fourth quarter), the Patriots continued their trend of , , , beating the Colts, which, based on recent history, was really no surprise. However, as I mentioned in last night’s Sunday Night Football Live Thread, this game really had no business being close, and it’s a testament to either Andrew Luck and the Indianapolis offense playing competently or the New England defense not being as good as we thought. In this case, it might have been a little of both (not including fourth downs, as shown above). But eventually, nature was able to drive the score to it’s most natural environment when mistakes from the Colts started to stack, all with a heaping side of LeGarrette Blount to help drive it all home. Which leads me to wonder, when the Colts draft defensive players, do they make sure that they can’t tackle first? Haha, just kidding, the Colts only draft wide receivers. With the win, the Patriots continue, along with the Bengals, Broncos, Packers, and Panthers to be the only unbeaten teams through Week 6. I’d say half of those teams are mediocre and the other half deserve their record. I’ll let you figure out which team gets the 0.5 left over from that equation…

In other news, I’d like to thank everyone who joined our Razzball-only FanDuel contest this past week. We still have one game to go, but thanks to all 55 readers who decided to play…

Keenan Allen – 14 REC, 157 YDS. Keenan Allen was the first player since Danny Amendola with the Rams in 2012 to catch 11 passes in the first half. He now has the most significant milestone I have ever seen in my life! CBS has such a unique well of useful information! Unfortunately, in what was turning into a record-breaking game for some sort of stat, Allen left in the third quarter from a hip injury. It didn’t seem serious, but we’ll have to wait until later today for an update. If he’s out for any significant amount of time, Malcom Floyd (5 REC, 95 YDS) would be a must-add with Dontrelle Inman (3 REC, 18 YDS, 1 TD) becoming viable in deeper formats.

C.J. Anderson – 13 CAR, 41 YDS and 4 REC, 25 YDS. Give Anderson and Ronnie Hillman (20 CAR, 111 YDS and 3 REC, 4 YDS) some credit… they have, at times, looked like they were in heavy consideration to actually score some fantasy points this season. I mean, in today’s NFL, stuff like that doesn’t matter as long as you try your best.

The Cardinals with John Brown (10 REC, 196 YDS), Larry Fitzgerald (8 REC, 93 YDS), and Michael Floyd (5 REC, 50 YDS, 1 TD) just have so many offensive weapons when they are all clicking. I could also be referring to gun ownership. They are located in Arizona, after all.

T.Y. Hilton – 6 REC, 74 YDS, 1 TD. I’m gonna pull a sheet from the T.Y. Hilton book and make people refer to me as L.Y. Longfellow. I’ll let you figure out what those letters stand for, you get one try in the comment section, and the first correct answer wins a Razzball t-shirt of your choice… good luck!

DeAndre Hopkins – 10 REC, 148 YDS, 2 TD. Gotta admire the classiness of the Jaguars fans, who stayed quiet for both their offense and the Texans.

Ryan Fitzpatrick – 19/26, 253 YDS, 2 TD, 1 INT and 4 CAR, 31 YDS, 1 TD. Feel the Fitzmagic! No seriously, magic’s the only way that happened. You know what is also magic? The way his beard is growing. I expect in the next couple of weeks that the Jets starting offensive lineup will include Mad Jack Churchill, Old Number Seven, and Grizzly Adams.

Arian Foster – 18 CAR, 53 YDS and 5 REC, 59 YDS, 1 TD. Foster is always described as a violent runner (especially yesterday), but how does one run violently? Is he just stabbing and shooting people as he runs by?

Andre Johnson – 3 REC, 35 YDS. Remembering Andre Johnson: How I Could Have Put My Team In A Better Position To Win, by Chuck Pagano. 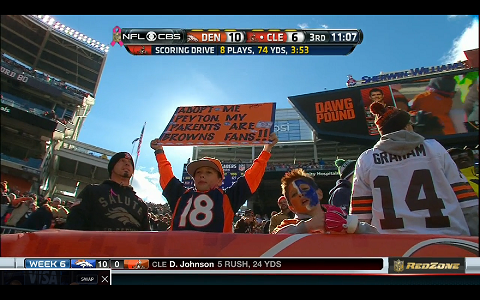 Duke Johnson Jr. – 9 CAR, 38 YDS and 3 REC, 39 YDS. In honor of Breast Cancer Awareness Month, can we change the Browns’ name to the Cleveland Prolapses?

Landry Jones – 8/12, 168 YDS, 2 TD and 1 CAR, -1 YDS. Your 2016 Cleveland Browns starting quarterback, Landry Jones! *Rushes to pick up Landry Jones. “Hey, how many points does he get for a hand-off to Bell? Oh, none? F*ck.” Rushes to drop Landry Jones.* Jones entered the game after Michael Vick (3/8, 6 YDS and 5 CAR, 47 YDS) suffered a hamstring injury. And also sucking. Doesn’t really matter, as he might have actually pulled a hamstring muscle because he sucked. Or visa versa. He had only three completions, and like two of them were for negative yardage. I mean, there’s no forward pass in rugby, right? So we know Vick can run a rugby offense…

Andrew Luck – 30/50, 312 YDS, 3 TD and 4 CAR, 35 YDS. As an architect, I’ll bet Luck could design some pretty good mud huts. While he seemed back to his normal Brett Farve like-self, (questionable and authoritative slinging) after sitting out two games with an unspecified shoulder issue, I think it’s more important to establish that his favorite movie is “The Girl with the Wagon Tattoo”.

Peyton Manning – 26/48, 290 YDS, 1 TD, 3 INT. Manning has the throwing motion of a catapult, and none of the damage. Honestly, I’ve seen squib kicks that had better spirals than the ducks he’s throwing now. Really, it’s almost sad… Manning is aging before our eyes at a rate only previously seen in Indiana Jones movies.

Philip Rivers – 43/65, 503 YDS, 2 TD. I can only assume that Rivers was so pumped up that his eighth child is on it’s way (expected due date was yesterday). And I bet Danny Woodhead (7 CAR, 8 YDS and 5 REC, 63 YDS) is the midwife. I have no idea how the Packers let this happen.. San Diego had a one-dimensional offense the entire game and were still carving up yards… WHAT A COUNTRY!

Demaryius Thomas – 10 REC, 111 YDS. And that’s the Denver touchdown leader… no, wait, Thomas isn’t the touchdown leader. Wait, who is then? …Aqib Talib? Haha, what is going on with this team?

Sammy Watkins – 4 REC, 48 YDS, 1 TD. Sammy Watkins is the new Ryan Mathews, I’m pretty sure. Left the game with an ankle injury on the touchdown and had to be assisted off the field. Has already dealt with a calf-injury, so we’ll have to see how the reports shape up later today.

Charcandrick West – 9 CAR, 33 YDS and 1 REC, 9 YDS. Was West not playing? Pick him up with your first waiver claim, they said. It’s a good move, they said. Well, at least Knile Davis (5 CAR, 13 YDS and 1 REC, 12 YDS) had an even more ineffective effort (which I didn’t think was possible), most likely keeping West as the presumptive starter.

Not even John Woo could take the Cleveland out of the Browns.