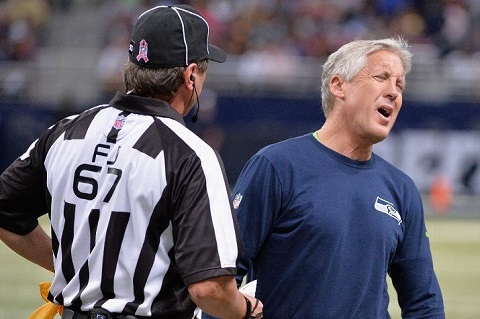 I thought trading away Percy Harvin was going to solve all your problems? Well, I guess trading away one of your best weapons doesn’t exactly solve terrible play-calling, subpar offensive line play, and very un-special teams play. So, despite the faulty narrative that I’m sure will be thrown about, here we are, CONDITION CRIMSON RED, also the color of Tom Coughlin’s face. As was alluded to early yesterday, imagining an outcome such as this was a fools errand, but it wouldn’t have been the craziest thing to think that the Rams could pull off the upset. And while it took wild and boner inducing events (which is also my pet name for your mom) to take place, the impossible was suddenly possible, and the 2013 Super Bowl champions are now 3-3. Said events (we’ll call them “Cialis”) included a hilarious punt return where Tavon Austin lined up on the left side of the field for the return, and acted like he was about to catch the ball, which drew in the entire Seahawks special teams unit, cameraman in full tow, and then this happened…

Later in the game, with Seattle needing a big stop for another chance at the win, Tre Mason broke through for a first down on 3rd-and-1, icing the game right then and there, until he was stripped. The ball bounced forward, was covered by a Rams lineman, only to pop out again and be seemingly recovered by Seattle. Replays did show Richard Sherman on top of the ball for a moment, but “technically” there wasn’t enough to overturn the officials call which had rewarded the possession to the Rams. That’s two straight losses for Seattle, a team which is now sitting at .500 on the season. Look on the bright side Seahawks fans. After this third loss, the band wagon crowd should be displeased enough to go away. Not as effective as a meteor, but it’ll have to do.

Joe Flacco – 16/25, 258 YDS, 2 TD, 2 INT and 1 CAR, 4 YDS. It’s amazing that a quarterback can have two elite touchdowns and two elite interceptions in the same game. I’ll call it: 2 Elite, 2 Furious. For those who want more Flacco eliteness and more Flacco furiosity.

Justin Forsett – 23 CAR, 95 YDS. Yes Ravens, I guess you can have this gift for releasing Ray Rice.

Torrey Smith – 3 REC, 81 YDS, 1 TD. Torrey Smith sighting! It was certainly the game all you Smith owners were waiting for. Only took about, err, almost two months. I respect the strategy.

Matt Ryan – 29/44, 228 YDS, 1 TD. You’d have to think that Matty Ice is essentially a home/away streaming option at this point. At least until they can figure out how to keep him from thawing out away from an environmentally-controlled dome. You could see that joke develop from space.

Steven Jackson – 8 CAR, 22 YDS. “THIS STEVEN JACKSON, I CALL HIM THE WALKING DEAD, BECAUSE HE PLAYS ON SUNDAYS AND IS ON BORROWED TIME.” – Jon Gruden

Kirk Cousins – 10/16, 139 YDS, 1 INT. This game had as much gross Cousins moments as an Alabama family reunion, which led to Colt McCoy (11/12, 128 YDS, 1 TD) being thrown into the Washington quarterback controversy. It’s now a triple-headed threat! Can’t wait to see how this develops.

Alfred Morris – 18 CAR, 54 YDS. Dissapointing? Yes. All his fault? I’d like to blame Daniel Snyder somehow, but Morris did tweak his ankle in the first-quarter. He departed for a brief amount of time, unlike the entire season where he’s departed for a large amount of time.

Bobby Sankey – 16 CAR, 56 YDS. When I see Bishop Sankey, I think of Sanka Coffee. Then I stop thinking, because I’ve never had Sanka Coffee.

Kendall Wright – 6 REC, 68 YDS, 1 TD. Stop it, I already dropped you and moved on. You can’t just show up like this and play with my delicate heart.

Tre Mason – 18 CAR, 85 YDS, 1 TD. It’s now safe to add Mason to your roster, as he clearly showed he’s the most talented back on the team right now. Wait, that seems vaguely familiar, almost like I’m having some déjà vu… 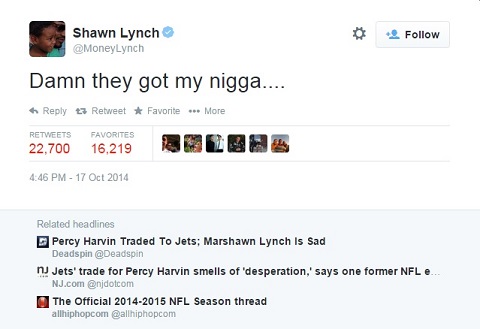 Trent Richardson – 14 CAR, 77 YDS and 4 REC, 41 YDS. Clearly this was only because the Bengals were in their “first game of the playoffs” mode. So lets not mention it ever again.

T.Y. Hilton – 7 REC, 107 YDS. From what I’ve read and watched, T.Y. stands for, like, 18 different things, none of which are his real name. I am now making one more submission. Thank You.

Giovani Bernard – 7 CAR, 17 YDS and 2 REC, -1 YDS. Bernard essentially represented the entire Bengals offense with his performance. Like some kind of hobo street art exhibition while having a stroke and pooping all over the place. Interesting, now that I think of it, this could also describe the Tampa Bay Buccaneers as well.

Jeremy Hill – 4 CAR, 15 YDS. And these were garbage-time carries, if you wanted to feel worse about owning him.

C.J. Spiller – 1 CAR, 53 YDS and 1 REC, 3 YD. Looks like we’ve been put out of our misery. Spiller suffered a broken collarbone, when he was trip-tackled after a 53 yard run, and will be out for the rest of the season. Fred Jackson (3 CAR, 12 YDS and 3 REC, 16 YDS) also suffered a groin injury, and will be out at least until Week 10. It looks like Bryce Brown and Anthony Dixon (13 CAR, 51 YDS) will be the primary backs moving forward, which begs the question, can E.J. Manuel be a running back? If not, do any one of you want to play running back for the Bills next Sunday?

Jerick McKinnon – 19 CAR, 103 YDS. Looks like Asiata has been down-grated.

Matthew Stafford – 27/40, 299 YDS, 2 TD, 2 INT. I think we have enough of a sample size to know that Matthew Stafford kinda sucks without Calvin Johnson. That, and common sense.

Reggie Bush – 4 CAR, 10 YDS and 5 REC, 22 YDS. Bush is killing me. Actively and literally killing me. Someone call the cops.

Golden Tate – 10 REC, 154 YDS, 1 TD. I think we have enough of a sample size to know that Golden Tate is kinda awesome without Calvin Johnson. That, and common sense.

Kenny Stills – 5 REC, 103 YDS, 1 TD. There’s certainly potential here, but Brees spreads the ball pretty evenly to anyone not named Jimmy Graham (who was only targeted twice, but did not have any setbacks with his shoulder injury, so there’s that). I don’t think he’s a pick-up this week due to inconsistency, but I’d keep an eye on him.

Jordy Nelson – 4 REC, 80 YDS, 1 TD. Do you think Rodgers and Nelson have bunk beds together? I can totally see that.

Jamaal Charles – 22 CAR, 95 YDS and 2 REC, 12 YDS. Still looks a bit limited from his , , , . whatever it was that happened to his ankle a month ago. With Knile Davis (10 CAR, 25 YDS and 1 REC, 11 YDS) getting a larger portion of the carries, this actually might help more than hurt here, keeping Charles effective so that Andy Reid can misuse him that much more.

Keenan Allen – 6 REC, 58 YDS. I recently gave a bold prediction for Keenan Allen as a guest-blurbist (is that a thing?) over at FantasyPros. Here’s me quorting me:

“Danny Amendola will not land on the IR for at least two more weeks. Wait. Actually, that might be too bold. So how about Keenan Allen will have top 10 wide receiver value for the rest of the season? There are a lot of reasons to not believe this, and those reasons are named Antonio Gates, Malcom Floyd, and Eddie Royal. Also, if I did the math right, he’s had a total of 3 receptions and 4 yards for the season thus far. But believe it or not, Allen still leads the teams in targets (42), and has been bogged down by an under-reported quad injury. As his health improves, you’ll see him move away from being a decoy/blocker and be the receiver he was last season. And I think that starts this week against the Chiefs.”

For what it’s worth, this game wasn’t big, scoring wise, but he looked more mobile and was a bigger part of the offense. It only will get better from here.

Carson Palmer – 22/31, 253 YDS, 2 TD, 1 INT. Continued to look healthy after missing most of the season with nerve damage. Or he could still have nerve damage, and playing against the Raiders is masking the injury.

Maurice Jones-Drew – 3 CAR, 6 YDS. I would call Jones-Drew’s production sh*t, but that wouldn’t be fair. I can actually use sh*t as fertilizer.

Dez Bryant – 9 REC, 151 YDS. I’m dressing up as Dez Bryant for Halloween, because he’s a monster.

Gavin Escobar – 3 REC, 65 YDS, 2 TD. I’m not quite sure what to make of this. I mean, Jason Witten (2 REC, 27 YDS) seems to be fading a bit here, but Escobar is bascially all touchdowns at this point. Then again, Vernon Davis lives off of that type of role. With a lot of depth at the position, fantasy wise, I still think he remains someone to keep an eye on, or a bye-week add, but that’s it for now.

Eli Manning – 21/33, 248 YDS, 3 TD and 1 CAR, 11 YDS. Even though Eli looked like he was lost at a department store and was looking for his mom for much of the game, it was a pretty good effort overall. And that’s probably just how he always looks. The loss of Victor Cruz hurts a lot, but Odell Beckham Jr. (4 REC, 34 YDS, 2 TD and 1 CAR, 13 YDS) has certainly emerged as a weapon for him. But can he do the salsa?

Ronnie Hillman – 14 CAR, 74 YDS, 2 TD and 4 REC, 29 YDS. You know, I wasn’t high on Montee Ball at all this preseason, but if you were to tell me that Hillman would outproduce his entire season in two games, I would have fainted right then and there.

Demaryius Thomas – 8 REC, 171 YDS, 2 TD. Guess he’s trying to make up for the first month and a half where he completely disappeared. Good hustle!

Stevie Johnson – 5 REC, 79 YDS, 1 TD. I guess God is happier with Johnson in San Francisco than he was in Buffalo.

Vernon Davis – 2 REC, 21 YDS. “THIS VERNON DAVIS, I CALL HIM EBOLA BECAUSE HE CAN’T CATCH IT AIRBORNE.” – Jon Gruden