Greetings! It’s not often that I deliver a double dose of Beddict, but when Jay calls for me, I come flying like an arrow shot by Robin Hood himself! Bullseye Muthaf*cka! By the way, I meant the Kevin Costner Robin Hood, not that flagrantly foul Russell Crowe garbage. Talk about disappointments! I was ridiculously jacked for that flick, but ended up staying up nights, sweating my nuts off, wondering what went wrong. Probably very much like what every night of Adrian Brody’s life has been like since he won an Oscar.

Speaking of let downs, some of you may know I attended the Super Bowl this past year, and being there, I witnessed the most excruciating  loss in sports history. Yes, my Hawks should have just stuffed it home like Jared at an after party for the Teen Choice Awards, and they could have gone on their merry way to the three-peat, but some (all) of the blame has to go on the defense, who gave up back-to-back touchdown drives in the 4th quarter. That is simply unacceptable, and that defense certainly wouldn’t be ranked number one in fantasy going into 2015, right? Au contraire, mon’amie. If you were paying attention, you would have surely noted that Jeremy Lane, the shut-down slot corner (pretty important when all the opposition does is dink and dunk) and Cliff Avril, arguably the most consistent pass rusher on the team, both went down with injury fairly early in the game. You ALSO may have noticed that ALL THREE of the Seahawks All-Pro caliber defensive backs (Thomas, Chancellor, Sherman) had major injuries and all had offseason surgery. By now, I hope you’ve figured out the Patriots win was a total joke and completely undeserved. But, hey, they said the same thing about me when I won male thong model of the year back in 2003, so I can totally relate to how you’re feeling for me saying that to your face… through the computer screen… in written form… I’ve yet to mention that both Brandon Mebane and Jordan Hill, the Seahawks most important defensive tackles also return to the fold (THEY ALSO MISSED THE SUPER BOWL!), as well as second year stud, Cassius Marsh (yes, he missed the Super Bowl as well…), and freak o’ nature, rookie Frank Clarke. Oh, did I mention Bruce Irvin is in a contract year and has put on 25 pounds of pure muscle to his insanely ripped and fast twitch muscle-having body? This is without question the most talented defense in the entire NFL.  Expect to witness both greatness and history. Say one thing for the Seahawks, they’re the most spectacular collection of defensive players in the history of the game. 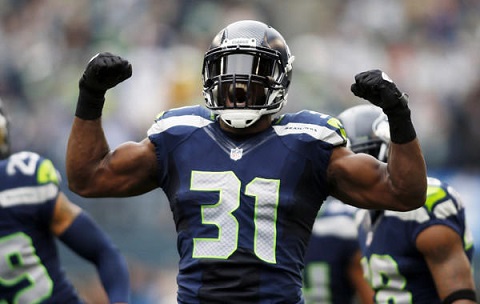 Okay, we all know the Seahawks are the greatest thing the Elder Gods have ever blessed this world with, so let’s take a look at my rankings and note a couple squads I moved a fairly large distance from the consensus on. I could write about every single team in my rankings, as I love the roster analyzation, but I’ll tell you what, you can get a good look at a butcher’s ass by sticking your head up there, but wouldn’t you rather take his word for it?

Defense that will Delight

New York Jets – Not including kick returns, the Jets finished a Christian Slater like 26th in fantasy defenses last year (and fired defensive mastermind, Rex Ryan), so Beddict must be smoking peyote to have them in his top 10. Oh ho-ho! Let me break it down for you right quick… The Jets had arguably the worst secondary of all time last year, and in fully realizing they shat the bed in not addressing the position, management went ALL-IN and made their greatest weakness their greatest strength. Bringing in pick-master Antonio Cromartie and a solid nickel back in Buster Skrine to go with Dee Milliner in the back field were huge upgrades, and Marcus Gilchrist should also provide an improvement at the safety spot next to last year’s first round pick, Calvin Pryor. Oh, and did I mention they signed the arguably the greatest DB in NFL history in Darrelle Revis and drafted the best overall defensive lineman in the draft in Leonard Williams? If Sheldon Richardson returns, this D-line will be filthy. And with Todd Bowles turning water into wine with his outside backers in Arizona, the Jets should find a way to increase their sack totals by a wide margin. Having great cover corners will allow Bowles to send the house whenever he gets that itch in his silk drawls, creating what could be a legendary amount of turnovers. Yes, the Jets will be defensively superior to the Super Bowl Champion (ughh) New England Patriots. You’ve got to be realistic about these things.

Defense that will Disgrace

Green Bay Packers – If someone could explain to me why the Packers were in many a writers top-10 fantasy defenses for this season, I’d be much obliged. Yes, they somehow finished 12th last year, but they’ve lost two of their top-four corners in Tramon Williams and Davon House, and their second best pass rusher (Peppers) is 75 years old. There are simply too many more talented defenses to place them that high. I’ve dropped them all the way down to 15th, which still seems a tad high, but I’ll assume their young db’s come to play, giving them a shot to get some late pick 6’s when opposing teams attempt to play catch up. The Packers are considered by many to be the Super Bowl favorite from the NFC this season, but I don’t see them being on the Seahawks level, and that’s the realest shizz I ever wrote.

Thank you for joining me for another edition of my initial rankings. Please feel free to discuss all/any defenses in the comment section below as there’s nothing more I enjoy, than talking NFL personnel. Have a blessed weekend, my goodmen.