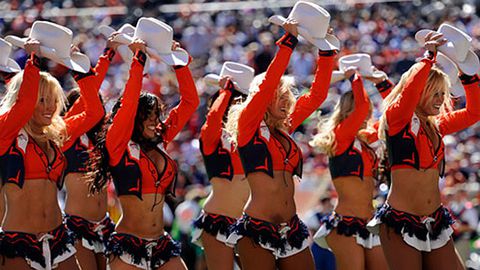 No, I don’t know what the Broncos cheerleaders have to do with the running backs, but it worked to get your click. Full disclosure, I was totally wrong on the Broncos backfield in 2018, as were many others. At the start of the season, I was expecting a timeshare between Royce Freeman and Devontae Booker with Freeman taking the between the tackles work and Booker being the primary pass catcher.

If you recall, the word out of Denver was that Booker was going to be given the first shot at the job while Freeman would have an opportunity to earn more work with De’Angelo Henderson and Phillip Lindsay getting some touches when available.

Fast forward to the first game of the season and Phillip Lindsay has an impressive performance and comes away with the most targets and touches. 17 games later, Lindsay is a pro bowl player, and while he won’t be playing in the game due to his wrist injury, he was able to finagle his way into a free ride out there as an NFL social media correspondent. Well done by Lindsay and the NFL to find a way to get a player out there who was afflicted by injury. Plus, he actually wants to go to the game, unlike so many others.

You already know the story of 2018, but here’s a quick recap before I jump into some player profiles and expectations for 2019.

The undrafted free agent from Colorado has the school record in all purpose yards and yards from scrimmage. He continued his all purpose utility and yardage making ways in his rookie season as he finished third in the AFC in rushing yards, 9th overall, and was 23rd in receiving yards among running backs.

My biggest concern with Lindsay as an asset for dynasty formats is his size and durability over the long haul. The Broncos may never give him a true workhorse running back share, but it may not matter. In 2018, Lindsay only had 30 or more snaps in 7 weeks with only 2 weeks of 40+ snaps. As a reference, the group of David Johnson, Ezekiel Elliott, Alvin Kamara, Todd Gurley, James Connor, and Saquon Barkley did not fail to reach 30 snaps in any game that they started. Even with the lack of snaps and missing week 17, he ended up as the 11th RB in standard and 13th RB in PPR.

Now for the film review. He can seemingly make himself even smaller and weave his way through openings that a lot of other backs cannot. He has nice patience behind the line while he’s waiting for a hole to open, which improved over the season as he wanted to bounce things out wide or just go to the designed hole early on in the year. He also shows good timing so that he’s not waiting in the backfield so long that it allows the back side of the play to catch up. The patience is vital as he doesn’t have the size of other backs who can rip through tacklers in the middle.

He has the moves to make defenders miss at any level. As he doesn’t run through many tackles, his top level lateral agility and acceleration are crucial, and he uses both to keep defenders off balance. As he reads the play developing behind the line, I did notice that if nothing develops, he will commit to a point of attack and simply drop his head to push forward. It’s not a terrible criticism as not all plays can go for big gains, and he typically falls forward despite his lack of size, but I see a few times that if he had kept his head up and balance more centered, he might’ve been able to gather a few more yards.

He’s willing to take runs inside or out, and doesn’t avoid contact like many smaller backs. One thing that surprised me when looking at the Denver backfield was that Devontae Booker actually lead the team in receptions and receiving yards. All three backs are used in the passing game, and I’d assume it is Lindsay’s blocking abilities that occasionally have him taken off the field for Booker. In general, the Broncos don’t use backs to run routes down the field, but I thought Lindsay ran hard out of the backfield, and showed solid, but not spectacular hands.

Here is one of my favorite runs of the year for Lindsay on this 41 yard touchdown. He waits for the play to develop, moves the safety to the outside, then cuts back to the middle, and you can see his top end speed to finish the big play. Once he gets on to the second level there’s nothing you wouldn’t expect, but the patience, and ability to wait out the safety really impressed me on this run against a top 10 rush defense.

At 6 foot tall and weighing 229 pounds, Freeman represents the downhill runner of the group, and he does fit that role in his style as he is a one cut and go type. Coming out of the draft, I was worried that Freeman’s game speed may not play up at the NFL level, and there are certainly times on tape that you can see it is a limiting factor. The first step that played up with his size at Oregon just doesn’t consistently show the acceleration needed to move through the line.

His lateral agility still plays in the pros as he will use his jump cut to make defenders miss in the open field or adjust the point of attack behind the line. While he is the biggest back of the group, the film doesn’t show him using his size as a physical threat, and often plays smaller than you may expect. I will give him some benefit of the doubt as he seemed to run with more of a physical presence early in the season before he sustained his ankle injury.

Some of the problem with his running style may be a lack of balance. There are many times where he will get tripped up running through the line and leaves yardage on the field as evidenced by his longest run on the season being only 24 yards. There is something about the way he runs where he is almost leaning forward as though he’s always expecting a hit, and it just doesn’t seem to do him any favors.

The Broncos will throw the ball to Royce, but has the worst hands of the three backs. He will actually reach out and grab the ball on receptions, but the drops are a problem. With that said, the Broncos didn’t seem to be overly concerned as they did split him out wide a few times.

There are 2 plays that I think show the best of Royce for 2018. One is against the Ravens with 7:22 left in the 4th quarter on 1st down. I couldn’t find a clip of this one, but the other run that I liked from Royce was versus the Chiefs where he shows you a little bit of everything he can do. It’s an outside run, but he lets his blockers get set up and then shows a couple of nice lateral moves to avoid defenders before dragging one into the end zone.

Booker is the one of these three that seems to have a fairly defined role. He is used almost exclusively in passing situations. This not much of a surprise as he has the best hands of the group and is the best in pass protection. As I mentioned in the Lindsay write up, the Broncos don’t utilize running backs in down field routes often, but Booker does occasionally run some routes that are 10+ yards down field.

Devontae shows more promise in the open field as runner than he does in the traditional role running between the tackles role. He is adept at making one guy miss, but doesn’t seem to have the vision to plan beyond the guy in front of him. He doesn’t read the openings in the line very well and will run into the back of his blockers at times. There’s a lot of start and stop in his game, and it’s something that he uses proficiently in the open field, but does it too much in the backfield at times and gets brought down from behind or misses the opening waiting for a better one.

Here is a look at Devontae working as a receiving back, and then showing some open field ability. He runs out of the backfield hard, freezes the defender for just a moment, and makes a nice cut out. He outruns the linebacker chasing him, makes a quick lateral move to avoid the next guy, and finishes it off with a little Eric Cartman, AUTHORITY!

As for my expectation for the running backs in 2019, while Lindsay is looking at some recovery time after his scaphoid fracture, he should be ready in plenty of time for camp, and I expect that he will be the primary back for Denver. However, given his size and the other options available, I believe that it will continue to be a timeshare with Royce potentially taking on more work and Booker maintaining his role as a passing downs back.

It is possible that Lindsay takes a step forward in the blocking department and usurps some of those passing downs responsibilities, but it may be in the best interest of the team to limit Lindsay to an extent and keep him on the field. If we’re looking at this from a dynasty value, while I do like a lot of what I see on film from Lindsay, as he reminds me of Christian McCaffrey given the size and willingness to still run between the tackles, but is not quite the same explosive threat we have seen from CMC. If you could get a RB with a more predictable timeshare and with more size in a dynasty trade, such as a Nick Chubb or Aaron Jones, I would make that kind of deal, but I also feel safe entering 2019 with Lindsay being my #2 RB.

I’m not overly excited by what I’ve seen from Royce Freeman in his first year, and while he should be owned in dynasty leagues, I may look at shopping him around if somebody believes he is the Broncos RB of the future. Devontae Booker remains, at best, a streaming option in deep PPR leagues as I simply don’t see him getting the work to be a meaningful contributor despite showing some progression in his game this season.