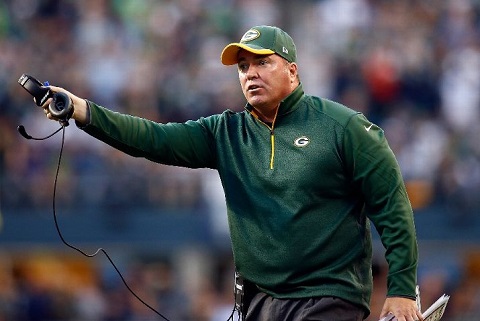 Come on refs, you’re usually with us on this…

Football finally happened folks. Let’s have some cake. OR watch the first two touchdowns of the season go to no one fantasy relevant. Yeah, you’re right. Let’s have cake instead. So yup, the season opener… It wasn’t that bad. I will say this- it is definitely the “traditional start” to the season… both elevated and dashed hopes, plenty of derpiness, and wild, crazy rethinking of fantasy players.

Mike McCarthy opened up the game by not calling useless run plays, which was weird. Earl Thomas then did his best to make Goldan Tate look likable buy fumbling a punt early in the game. Then some vulturing of the touchdowns happened, as alluded to a few sentances ago. Two, if you’re keeping count. And the half essentially ended when Aaron Rodgers had a chance to get a first down, possibly setting up a something-and-goal situation, but decided to throw the ball away instead of taking a hard hit running for three yards. Very week one-ish. Building off that momentum in the third quarter, Rodgers threw a tipped interception via Jordy Nelson to Byron Maxwell (proving that mabye Nelson’s hands did not have enough grit at that moment) which led to a Seattle field goal. However, midway through the third quarter, the Packers offense starting gelling a little (hair gel maybe?), but a fourth-and-five attempt ended with a sack at midfield, and it only got worse from there. The next possesion, Aaron Rodgers was stripped near their goal line, leading to a safety. Discount double point? And then Beastmode continued making everyone who drafted Christine Michael look silly for doing so. Beastmode seems to be here a while longer I think. In the fourth quarter, Rodgers threw a touchdown pass to Randall Cobb, keeping some small sliver of hope alive being just 13 points down, but with the Packers needing a valiant defensive effort, it was easy to write them off right there. And yes, just in case you missed the game, SPOILER ALERT, the crowd was loud. Just remember, this is the part when you remind yourself not to overreact to week one’s games.

Russell Wilson – 19/28, 191 YDS, 2 TD and 7 CAR, 29 YDS. A very Russell Wilson game. He was described as cerebral, which I’m assuming is just the short version definition for a quarterback that only throws screens, scrambles, and just feeds to Marshawn Lynch and Percy Harvin as quickly as humanly possible.

Marshawn Lynch – 20 CAR, 110 YDS, 2 TD. His real Sunday Night Football player intro: “Marshawn Lynch, Skittle Skool.” So yeah, how about all that stupid running back by committee talk? Sure, it was against a defense that overcommitted anytime it saw Percy Harvin breathe, but this has to be a good sign for everyone who thought the reports of Lynch’s impending collapse were rubbish.

Eddie Lacy – 12 CAR, 34 YDS. I’m still waiting for Victoria’s Secret to capitalize on what could be one of the better “take player’s name and use a play of words” advertising campaigns out there. Regardless, I love the way Lacy runs, but he’s finished before turning 28 if he keeps this up. (BREAKING: It appears that news happened when I was sleeping… how dare the news! Apparently, Lacy sustain a concussion during game last night, which was confirmed by Mike McCarthy. He should have also confirmed that Don Capers is terrible at what he does. “As for Lacy, he was wearing the new Riddell helmet Thursday night called the SpeedFlex, which the company says helps better absorb impact force by adding flexibility to certain parts of the helmet.” So I guess this means back to the drawing board for you? As of now, James Starks is the go-to handcuff, but that just made me yawn for 10 minutes. I’m sure there are better options on the wire…

Percy Harvin – 7 REC, 59 YDS and 4 CAR, 41 YDS. Not sure how he survived one game. Take a look at Percy Harvin, because it is likely your going to miss him for at least eight games this year because his head is made of paper maîche.

Randall Cobb – 6 REC, 58 YDS, 1 TD. I always get the urge to eat a cobb salad when I see him do anything. WEIRD, I know. And to the one dude who I told to start Cobb over Harvin… it sorta might have worked out? For no one? Yeah… no one…

Zach Miller – 3 REC, 42 YDS. Zach Miller showed the reason why the Raiders traded him away.

In other news… Josh Gordon now has a chance at a reduced or complete conciliation of his season long suspension. “The NFL and the player’s association are currently negotiating to lessen the penalties for non-performance enhancing drug use. This Sunday is rumored to be a date that an agreement could be reached.” I guess no one cared until Wes Welker started  dropping Molly’s. I’m not really enthused at the news as some may be, that being said, if you see them on the waiver wire, and you have, say a Hartline, an Amendola, or a Boykin on your bench, that’s around the area I would drop for the chance at Gordon and Welker breaking my heart as they usually do. At least at that cost, I’m okay with a broken heart. DO YOU HEAR ME? I’M GONNA BE OKAY. SERIOUSLY. I AM. Maybe.

Welp, that was quick. Andre Ellington had an MRI on his foot after being limited in Thursday’s practice. “Ellington went for an MRI on Thursday as well, which may just be about an abundance of that aforementioned caution but it’s never a great development when your starting running back needs to have tests done on either of his feet.” How astute of you, quote. A running back needs healthy feet, who would’ve thought? As of now, Jonathan Dwyer is a possible add, but I’d kind of rate him the same way I rated James Starks, and that’s with 8/10 yawns.