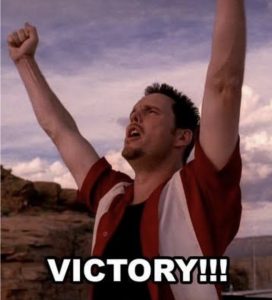 Before Game Of Thrones, HBO had a terrible-but-awesome show about some bros in Hollywood. It was called Entourage. I guess it was called Entourage because the friends formed an entourage. High brow stuff! This show was exactly what 19-21 year-old me needed every Sunday. Would I again binge watch the show that got me into serialized television even with a lot better television coming out almost weekly? Hell yeah I would.

Anyways, if you haven’t seen Entourage, Johnny Drama is the less famous brother of Vincent Chase, but before Vince got famous, Drama starred in a terrible cult classic show called Viking Quest. The way Minnesota played last night is probably comparable to Viking Quest if it were an actual show.

As I mentioned, the Vikings just didn’t look very good last night, but they played well enough to win. I think that was probably the plan all along with Thielen out. Get out of this game with a win and as healthy as possible. I think we see this a lot when a good team plays against a bad team on Thursday night. When you have a Thursday night game, you’re basically getting an extra half of a bye week. The Vikings defense still looked pretty good. They were forcing turnovers, providing pressure, and were generally in the right spots to make plays. When you have a game with 28 total points, the fantasy tidbits can be few and far between, but let’s see what we can dig up.

– Adrian Peterson was clearly motivated by his return to Minnesota. He was running harder than we have seen him run all season. It was the ol’ circled date on the calendar, but you know, it ended in disappointment like they usually do. Peterson ran for 76 yards and averaged 5.4 per carry. He also caught 2 passes for 27 yards. We’re probably back to old man plodder Peterson next week.

– Dominick wrote about how McLaurin was a sell earlier this week. 4 catches for 39 yards isn’t going to do a lot to raise his value. Tough matchup, at least he got SOMETHING. Hopefully it was on your bench.

– Case got concussed after the Redskins were surprisingly moving the ball kind’ve well in the first half so Dwayne Haskins came in the second half and we collectively held our breath. Callahan stuck to his word about establishing the run and Haskins only attempted 5 passes. One of them was picked off. I know we all like to see the new rookie toys as soon as possible, but throwing an unprepared rookie behind a bad offensive line isn’t going to do anybody any good.

– I noticed Kirk Cousins has been throwing with some zip on the ball. He looks a lot better than he did at the beginning of the season. He was efficient, only throwing 3 incompletions all game. the zero touchdown aspect was pretty disappointing. Perhaps he will be a solid fantasy option going forward this season.

– Runs like his touchdown rush is part of what makes Dalvin Cook special. Sure, it was a 5 yard run that we take for granted but his patience and body control to get the ball over the goal line before his knees go down separates him from so many other RBs that we tout that aren’t so automatic inside the 5 yard-line. Melvin Gordon could probably learn a thing or two. Shots fired. Dalvin Cook’s ability in the passing game puts him right behind Christian McCaffrey, but for a much cheaper draft day price. Think about it; if you’re a Dalvin Cook owner, you have him and probably ANOTHER elite player, unless you messed up your first round.
– After a slow first half, Stefon Diggs ended up with a pretty good game outside of the fumble. Diggs caught all 7 of his targets for 143 yards and no touchdowns to speak of. Diggs should continue to be a great option with or without Adam Thielen on the field.

– Listen, if Kyle Rudolph can’t put up fantasy points with Thielen out against the Redskins, he’s never going to be able to do it. Rudolph had the same amount of targets (3) as Irv Smith Jr. last night.