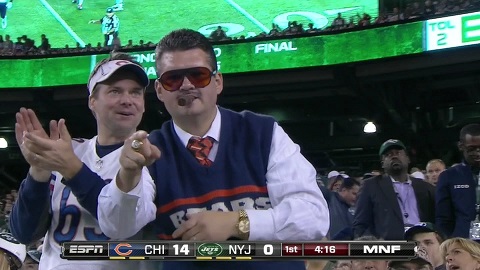 I would say the Marshall Plan was a smashing success in an attempt to combat Soviet Communism back in 1948. Why Chicago was trying to invest $17 billion in aid to Europe last night was anyone’s guess, but that plan would have probably netted more yardage than Brandon Marshall. Despite the game looking somewhat unspectacular on paper (like how the Jets are not as bad as you would think, if you only look at them on paper), the game turned out to be what I expected last night, a dramatic and entertaining game mixed in with plenty of derp for good measure. The Derpmating, if you will. And while the Jets are a mistake-prone football team, their secondary did a good job against a vastly superior Chicago receiving core along with another strong effort from their front seven. The only problem is that the Bears wear able to take advantage of those mistakes, even with their entire secondary dying in the second half.

Matt Forte – 13 CAR, 33 YDS, 6 REC, 43 YDS. As was somewhat expected, the Jets stingy run defense shut him down to an extent, but was still able to produce some PPR value unlike the 49ers game. So hopefully you had some PP… and I guess R, so that doesn’t sound awkward.

Alshon Jeffery – 8 REC, 105 YDS and 2 CAR, 13 YDS. I would be Alshon Jeffery for Halloween, but I can’t reasonably simulate his majestic wingspan well enough to do so.

Brandon Marshall – 1 REC, 6 YDS. Aggravated his right ankle in the second quarter, but he did return in the second half, sort of. He was physically present, though really unable to do anything noteworthy. Kinda like my ex.

Eric Decker – 1 REC, 19 YDS. MORE HAMSTRINGS FOR THE HAMSTRING GODS. Playing sparingly in the first half, Decker exited the game after his only reception. As of now, he is questionable for Week 4 against the Lions, but that could probably describe the entire Jets team at this point.

Greg Salas – 2 REC, 56 YDS. Hey guys, the Rams cut Greg Salas. Or traded him, or something. He didn’t make the Rams. That’s what I’m saying.