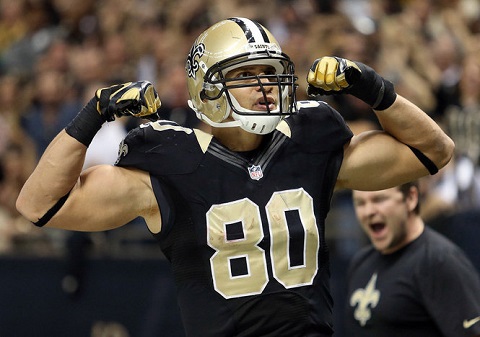 While Jimmy Graham will probably be the best Sonic ever, it remains to be seen how Russell Wilson and the system in place will utilize him. Sure, it’s hard to get a grasp on the game plan when your best catching tight end starred in Bottle Rocket, but as of now, I think this has a net-neutral effect on Graham’s value. Drew Brees‘ value certainly drops, but there are moves to be made out there that could negate the hole that is Brees’ escape valve and end zone target.

Jake Locker retired, sabotaging the rest of the Jets offseason plans, I’m sure, but in an interesting “show me” trade (or I guess you could also call it the “ah, what the heck, why not?” trade), the St. Louis Rams have traded oft-injured Sam Bradford (who broke both clavicle bones on hearing the news) to the Eagles for Nick Foles. This is a win-win for both, as a change of scenery seemed inevitable. Foles might have a chance here to be a top-12, but certainly not going into the season.

DeMarco Murray has removed all pictures related to the Dallas Cowboys from his twitter. Despite this not being really any substantial indication that his time in Dallas is over, this is basically what I do when I break up with someone. That or unplug their fridge on the way out…

Patrick Willis is retiring, but the big news coming out of San Francisco is that Colin Kaepernick is on the block. I doubt this, but wouldn’t surprised if the 49ers go into full rebuild mode. Mostly because Trent Baalke is an idiot. Frank Gore signed with the , Colts and while I think this ultimately might be a good thing in some ways, the age factor really gives me pause. I’d like to see what else the  Colts do, but as of now, Gore’s value doesn’t really change. Unless he pulls a Trent Richardson, which seems highly unlikely for anyone not named Trent Richardson.

The Lions replaced Ndamukong Suh, (who signed with the Dolphins for $60 million guaranteed, highest ever for a defensive player) with Haloti Ngata. While I’m interested in what the dollar amount will end up as with all the fines Suh draws when he enters within a five mile radius of Tom Brady, it sure feels like this division is really intent on finishing three games behind the Patriots. Just look at the Jets going out and trading for Brandon Marshall, and of course the McCoy trade for the Bills.

Owen Daniels signed with Denver (good!) and Eddie Royal signed with the Bears (who cares!), the Jets released Percy Harvin (Lord have mercy, there’s no Percy?), Andre Johnson wants to follow Gore to the Colts (I like it!) and Julius Thomas signed with the Jacksonville Jaguars, ending his reign as a pass-catcher in the NFL. For what it’s worth, Murray might end up there, meaning they might only have to fill 44 other holes.

If this continues, I’ll be traded twice this offseason…