Greetings! Many of you were no doubt overwrought about my possible whereabouts this past week. Yes, slaying Kings in Canada can be quite dangerous, especially when considering the monstrous killer whales, man-flesh desiring grizzly bears, seals that will bite your dong off when you’re urinating off the bow of the boat, bald eagles that would like nothing more than to peck out your eyeballs, and last but not least, Molson Ice! Canadian beer is like moonshine! If you follow me on Twitter, it’s safe to say you witnessed some of my slayings on display, and much unlike my “other” pics, the fish were quite sizable. You’ve got to be realistic about these things. Anyway, I’m back and ready to rock out super hard. Yeah… cool… anyway… Let’s get to a few of my thoughts on the wide receiver position. Attempting to read through Matthew Berry’s Love/Hate post has inspired me to keep this post short and sweet. Good Gods.

Julio Jones – Julio was a mole’s pecker away from 1,600 yards last season, and that’s with missing one game after being overly fatigued from absolutely roasting and embarrassing the Cardinals’ Patrick Peterson. On average, Jones is the 5th wideout taken in this year, but in my shizz, he’s number one ya’ll! Am I crazy? Oh ho-ho! I just might be, but I expect Jones to put up 12 touchdowns, minimum, this season, all while piling up similar catch and yardage numbers to last season. Roddy White should be healthy and even if not, I expect Hester and Hankerson to get the job done in his absence. I also like the improved TE group, with Moeaki and Jacob Tamme… okay, I don’t LOVE it, but hey, it’s an improvement! Seriously though, a crash test dummy on a scooter segway could probably cause more damage than last year’s group.

Devin Funchess – Is there any worse possible injury (other than to a star quarterback) than the Carolina Panthers losing their star second-year receiver? Think about it… without Benjamin, the Panthers passing attack is disgracefully disgusting, with Cotchery (gulp), pencilled in as the number one wideout. This is where Funchess comes in. From everything I’ve seen on tape, Funchess looks to be a legit weapon and he should be rising up fantasy draft boards at warp speed. Is he going to replicate what Benjamin did last season? Don’t be ridiculous! But WHO else is going to get the ball other than Greg Olsen? Pencil in Funchess for 800 yards and 8 TDs. We are all witnesses.

Terrance Williams – With no DeMarco Murray there, the Cowboys should be throwing more this season. I’d like to think so anyway, and the largest beneficiary of that would be T-Will, who became Romo’s go-to on broken plays. Maybe they’ll actually run some plays for this talented speedster, as he’s facing single coverage much of the time due to the opposition focusing on putting the clamps on Dez Bryant. Just a thought.

Kenny Stills – Kenny Stills specializes in going deeper than a Mastiff into a Rat terrier… Ryan Tannehill is the worst deep throwing quarterback that I’ve EVER witnessed. He’s young enough to have improved, but I’ll believe it when I see it. Not touching Stills.

Eric Decker/Brandon Marshall – I was semi-intrigued with Geno under center, but with Harvard in there, I won’t be going near either of these vets. Seriously, I’d rather tag Khloe Kardashian, before her vag rejuvenation, butt implants, lipo, AND penicillin, than draft Eric Decker. He’s ranked WAY too high.

Breshad Perriman – I loved the pick during the draft and still feel okay about it, but dude simply isn’t ready. Thus far he’s done nothing in camp but drop balls and hurt his knee. We also can’t ignore the fact this guy has the worst hairline I’ve ever witnessed. I apologize, but I must question your intelligence if you’re actually walking around like that. Totally unacceptable. 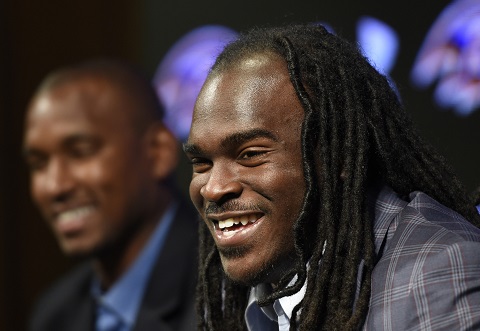 Thank you for joining me for another rankings edition of Disgrace/Delight. As per usual, I very much look forward to our dialogue in the comment section below. After next week’s RB’s and QB’s posts, we will be all caught up and ready for our drafts. No matter what, do NOT forget to sign up for Razzball RCL leagues to compete for awesome prizes and possibly defeat me in combat. Anything is possible but I’m on mission from the Elder Gods this season. My goal: to win EVERY single league I enter. Boom, and it’s on like Donkey Kong. Come see me!