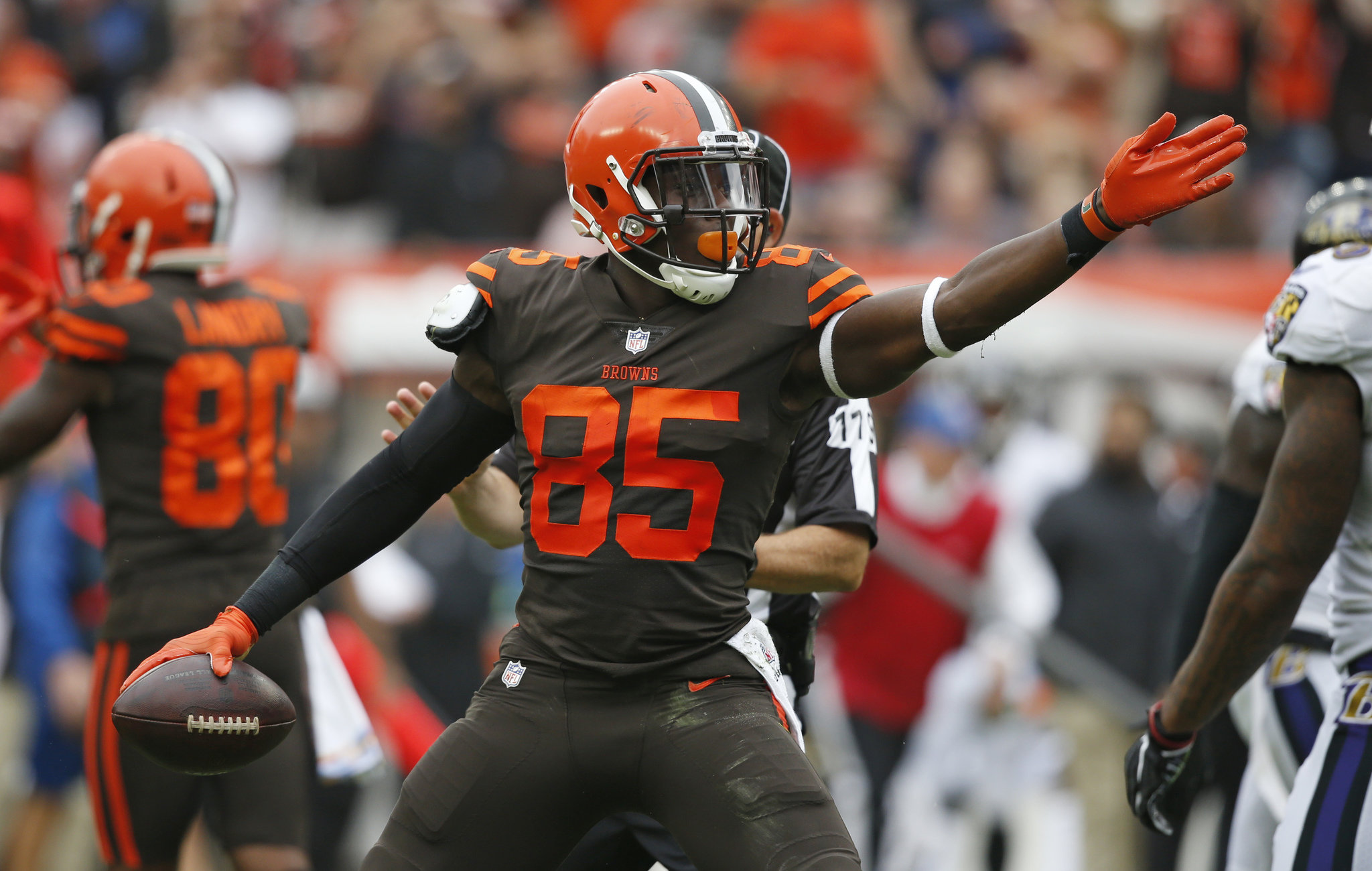 If you missed the special announcement last week, we have officially launched our 2019 Razzball Commenter Leagues on Fantrax, with the Top 10 overall finishers in the RCL’s getting a spot booked in the 2020 Razzbowl! It’s quite the prize, and I can’t wait to see how the year shakes out. Lots of spots are open to play against some of our staff writers. Be sure to sign up for a league today!

Today will be the second part of a series I started last week, which will be to take a look at the ADP rankings provided by Fantrax (which is gathered by their own site-hosted drafts), and compare that to our own 2019  projections provided by our stat guru/oracle/wizard Rudy Gamble, to identify which players to target, and which to stay away from. Simply put, which players are we high on compared to Fantrax? Which players are we lower on?

Today, we’ll be taking a look at some Tight Ends that have some disparity between our own site projections and Fantrax’s ADP.

While the Browns offensive seems pretty darn ripe for the picking heading into the season, with everyone tripping over themselves to draft OBJ, Baker Mayfield and Nick Chubb, I don’t think many are easily pulling the same trigger on David Njoku. While he could end up finishing in the Top 10 for the position at the end of the year, I do think there are some red flags that could deter us from drafting the young TE. First off, his splits with Freddie Kitchens in charge last season wasn’t ideal. Before Kitchens was promoted, Njoku averaged 4.2 targets per game. After the promotion, Njoku averaged 3.1 targets per game. With the addition of Odell Beckham into the offense, Njoku’s target share drastically decreases his fantasy ceiling. He’s a Top-15 option at the position, but with many other targets at the position, I’m definitely not high on him, and it doesn’t seem like Rudy is either.

While there isn’t a huge gap between Fantrax’s ADP and our projections, it’s a big enough gap to know that Henry is a great TE to target on draft day. If you don’t want to pay up for one of Kelce/Kittle/Ertz, Henry’s value in the 6th is a great backup plan. With the departure of Antonio Gates, Henry’s usage rate will only go up as a result. From 2014-16, Antonio Gates saw 6.9 (nice) targets per game, so if Henry can maintain his current averages with this usage, his production will be similar to what George Kittle averaged last year. While there is some risk with Mike Williams taking away his red-zone targets, I don’t think it’ll be enough to deter us from Henry. He’s a great target at the position.

Thanks to some injuries, Andrews took full advantage of his playing time last season, catching 34 passes for 552 yards and 3 TD’s. What’s important to know about Andrews last season is that he really clicked with Lamar Jackson, once he took over. Once Jackson was the starting QB, Andrews led the team in receiving yards, accounting for 26% of Jackson’s total passing yards. He did it on a 14% target share, and even with the offseason acquisitions at receiver, Andrews should still see a healthy target share this season. If Jackson’s passing numbers get better, Andrews could find himself in the Top 10 at the end of the season, and comes at a really nice value on Fantrax in the 13th round.

I spoke a little bit about the Falcons offense in my last post, but to summarize, I think they could see some major negative regression on overall offensive production this year thanks to new OC Dirk Koetter, and due to their defense getting healthier. Hooper himself is not only super TD-dependent as a fantasy player, but too inconsistent on a week-to-week basis, posting many TE2 and TE3 finishes. While I have written about him as a late round target in the past few weeks, I’ve reversed my position due to some more research I’ve done, as well as seeing that our projections currently have him as the #20 Tight End, which isn’t a good sign at all.