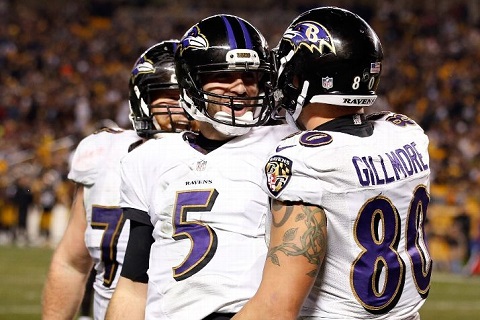 It’s been commonplace around here to poke a bit of fun at Joe Flacco’s expense, and I have to admit, it probably starts with me. Look, I don’t actively root against the guy. Granted, I don’t root for him either, seeing as how it’s like rooting for a speed bump. But there is a certain something about him that really fascinates me. And that can essentially be boiled down to the the gift that keeps on giving… and that’s the process for measuring how elite Joe Flacco actually is (not just his eyebrow(s), which are too f*cking elite). Well folks, I think it’s time, once again, to go through this process once more. After a convincing win against a Steelers team that was clearly missing LeVeon Bell and any semblance of a third down defense,  John Harbaugh said this after the game:

“Joe Flacco, what can you say… He’s the best quarterback in football.”

Well, first of all, don’t lead this off by asking “what can you say”. I can say a lot of things, and none of them would be what you said, John. Granted, yes, Flacco has a long history of being part of a lot of successful Ravens teams, including a Super Bowl ring and being the only quarterback in NFL history to win a playoff game in each of his first five seasons. Of course, there’s also the fact that he’s not really that good of a quarterback. But hey, when you’re just elite enough to win, who cares?

I guess I don’t. Then again, I’m now realizing that the Ravens vs. Patriots media extravaganza might be something I could have done without… been there, done that, ya know? Wait. What’s that you say? We’re going to have a Petyon Manning/Andrew Luck narrative to deal with as well?

Steve Smith Sr. – 5 REC, 101 YDS. The reason Steve Smith is so angry is because he had to live in Utah for a few years. Which makes it seem so amazing that Karl Malone is so even-tempered.

T.Y. Hilton – 6 REC, 103 YDS. Sounds like the name of a big Texan oil baron. Or a new, deadly and exotic form of venereal disease named after a Hilton.

Hakeem Nicks – 3 REC, 59 YDS. Hakeem Nicks… useful? Talk about once upon a time… 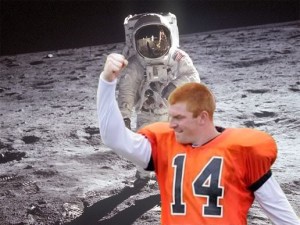 Tony Romo – 19/31, 293 YDS, 2 TD and 2 CAR, -2 YDS. Well, give him credit, Romocember is over, and to celebrate, he decided not to lead the Lions to victory yesterday. But, just a friendly reminder: If you rearrange the letters in Tony Romo, you get “Moron Toy”.

Joique Bell – 12 CAR, 43 YDS and 4 REC, 42 YDS. At some point they’re just going to phase out Matt Stafford and hike directly to Bell.