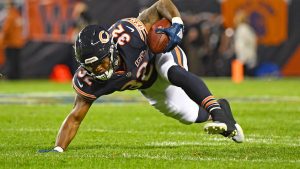 In a nutshell, the idea is that players should have a FP/WO ratio of about 1, and if they are above that they are either very efficient or lucky (probably via TDs). If they are below that number, the inverse is assumed. In the most recent look into FP/WO I saw 3 backs that looked like strong in-season buys prior to week 8: Le’Veon Bell, Leonard Fournette and Marlon Mack.

Le’Veon Bell (FP/WO 0.75 ⇒ 0.81) – In the last 4 weeks, Bell has turned in 4 of this top 6 games on the year. A few things have helped this of course, not the least of which being the return of Sam Darnold as well as some cake matchups. Nevertheless, a historically productive player seeing tons of volume saw his FP/WO increase after floundering to start the season – the system checks out. He still isn’t dominating the fantasy landscape, but recently Bell has been a solid if unspectacular RB1.

Leonard Fournette (0.84 ⇒ 0.88) – Lenny’s bye week occurred since the last piece so we have less data points than the others. However, it’s safe to say all the positive regression hit in week 12. He was the week’s RB1 with two 1 yard TD plunges to go with his typical rushing and receiving volume. Fournette was one of the most obvious buy candidates out there so I’m not patting myself on the back, but again this system seemed to work. He should continue to find the end zone more than he has in the first 11, weeks potentially making him a league winner down the stretch.

Marlon Mack (0.87 ⇒ 0.94) – Mack unfortunately broke his hand in week 11 but was trending up since FP/WO identified his under-performing ways. With the emergence of Jonathan Williams, Mack may not come back into his excellent workload making him a risky start whenever he returns. Speaking of, Williams has been excellent jumping into Mack’s role and seeing over 15 WO per game. With an FP/WO of 1.2, Williams is producing the way we all wished Mack had been doing all along.

With one week to go in the fantasy regular season, who’s leap could take place when it matters most? In football, progression usually happens fast because it is mostly a binary function of scoring a TD or not. If yes, point shower… if not, more underwhelming point totals. So like Fournette in week 12, when the dam breaks it can break big. And it can win you leagues.

Kenyan Drake (FP/WO 0.79) – There are a lot of things happening surrounding Drake’s fantasy context. In my opinion, he is one of the most interesting situations in recent memory. Always a metrics darling who wasn’t being used properly in Miami (according to Twitter), Drake had a top 10 ranking in juke rate and yards per touch in 2018.  But Hallelujah! He was traded mid-season to a team with one of the most creative offensive minds in the NFL. Not only that, but multiple injuries thrust him into a bellcow role immediately for the Cardinals.

The contrast in usage is shocking as he went from 10.4 touches per game (3.6 rec) to 18.9 touches (5.3 rec). That’s the difference from a FLEX workload to a strong RB1. Now the Cardinals are through their bye week, and sporting a supposedly healthy backfield. Drake’s WOs going forward are unknown but his FP/WO certainly implies he’s due for increased production. Nearing the finish line, the question is whether he will get enough chances to put managers over the top.

David Montgomery (0.82) – DMont’s season has been maddening for those who invested in his talents this August. For starters, in week 1 he split work with Bears legend Mike Davis who received 11 touches. For the rest of the season, Davis saw 7 total touches and then was released after week 9. Cordarelle Patterson has received multiple tilting touches inside the 10, none of which have converted. The real masterstroke was coach Matt Nagy galaxy-braining a 3 touch game for Montgomery week 7 against the Saints.

Despite all this turmoil, he leads the league in goal line carries on a team that is 28th in scoring offense. It’s ugly, but there is reason to believe that DMont can come through for us in the fantasy playoffs. His FP/WO is gross, and the offense as a whole is contributing to that. However, given his numerous scoring opportunities and the 5th easiest playoff schedule for RBs, I won’t be benching him.

Saquon Barkley (0.84) – Barkley’s FP/WO in week 8 was 0.94, so it’s come a long way down. The elephant in the room is whether or not he’s been healthy since returning from an ankle sprain in week 7. The Giants certainly have not been babying him as his usage remains elite at 18.5 WO/game. Sadly, Barkley’s yards per carry have tanked from 6.4 pre-injury to 2.7 post. Although one major contributor was a horrific 13 carry, 1 yard performance against the Jets.  Encouragingly, his yards per reception have actually been higher since coming back: 7.7 vs. 6.7. So, maybe he can still move in space like the Barkley we need.

If he doesn’t get shut down and continues to receive a top 3 opportunity share, I believe better days are ahead for those that have kept the faith. The cherry on top of all this is a week 14-16 schedule that has allowed the 6th most points to RBs this season. You’re obviously not benching ‘Quon, but let this give you some hope he can help you secure a ring.