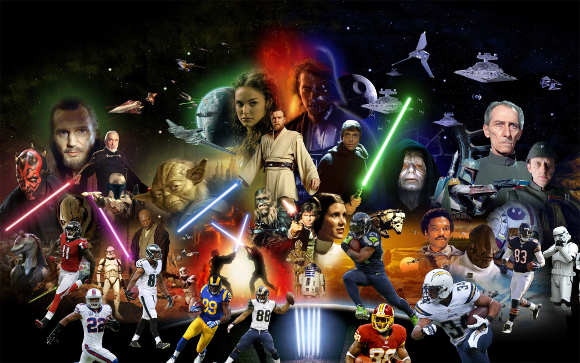 A long time ago in a fantasy football league far, far away…

I’ve been waiting for you Le’Veon Kenobi. Le’Veon… Now that’s a name I’ve not heard in a long time.

The force is strong with the Stats Machine. Influenced by Jedi Masters such as Delanie Skywalker and Yoda, its ability to harness the force is unparalleled. With the highest midichlorian count in the galaxy, the Stats Machine is destined to help you defeat the dark side and bring peace and victory to your league. So grab a Colt 45 with Landry Calrissian (yes the Stats Machine just gave a shout out to Jarvis Landry), fire up a hookah with Jabba the Luck, let out a Chewbacca-like growl with Queen Amendola and get ready to start swinging your light saber. And remember, it’s not the size (or color) of your light saber that matters, it’s how you use it.

Only at the end do you realize the power of the Stats Machine. Jabba the Hutt one, Hutt two… Hike!

Boba-Fred Jackson had only 6 carries for 34 yards, but combine that with 8 receptions on 10 targets for another 78 yards and a touchdown and you have a week that any bounty hunter would appreciate. What can Brown do for you? How about 62 yards on the ground and 5 catches for 27 more. According to Rebel Leader Ron Burgundy, with both Ryan Matthews and Danny Woodhead out, Downtown Donald Brown is the man in San Diego (after himself of course). Honorable Mention: (Joe McKnight 23.7)

Padawan Matthews showed great promise this week catching 8 of 9 passes thrown to him for 59 yards and 2 touchdowns. At this point he isn’t much more than a bye week fill-in, but he’s going to be a popular pickup this week and it might be your last chance to get him at a bargain. If it’s not already too late. Honorable Mention: (Jeremy Kerley 27.45)

DJ Lance Kendricks had 6 receptions for 29 yards and a touchdown. Jared “too many Cooks in the St. Louis Rams tight end kitchen” caught 7 of 9 targets for 75 yards. Individually they each had decent days, combine them together and you have a Jimmy Graham-like performance. If you need help adding up their stats you can ask RG3-PO, my new protocol droid I bought while in the nation’s capital. Please excuse his limp. Honorable Mention: (Niles Paul 19.9)

If Andrew Hawkins is still on your waiver wire, stop reading, go get him and then come back. I love him in PPR leagues. According to the Stats Machine he is the 10th best wide receiver through 3 weeks of fantasy football. The Stats Machine would also be quick to pickup Quick who has been consistently above average every week. As for the running backs listed above there are some yelling “It’s a Trap!” as their futures are quite uncertain. Despite putting up back to back stud worthy performances, starting Darth Knile could be a major risk to the rebel cause because I’m afraid the Jamaal Charles could be quite operational.

These are the top performing players based on last week’s stats regardless of percentage owned.

Marshawn Solo piloted the Millennium Falcon through the Kessel Run in less than 12 parsecs!!! While he was at it he rushed for 88 yards on 26 carries and caught 3 of 5 targets for 40 yards and a touchdown. He capped off this impressive performance with a game winning 6 yard overtime touchdown run. After seeing Peyton Manning‘s expression after he scored he thought “it’s not wise to upset a wookie” as he Beast moded into the locker room. Honorable Mention: (Rashad Jennings 28.4)

Do… or do not. There is no try. Count Julio do. He racked up 9 receptions for 161 yards and 2 touchdowns on 11 targets. Best wide receiver last week and on the season he is, hmmm. But let’s not shortchange Garcon who matched Jones this week by posting 11 receptions (16 targets) for 168 yards and a touchdown. Honorable Mention: (Antonio Brown 35.05)

Don’t look now but Martellus Windu has scored a touchdown in every game this season, scoring 2 in last Monday night’s matchup with the Jets. He caught 5 balls for 54 yards and has quietly climbed the ranks on the tight end counsel. Honorable Mention: (Greg Olsen 22.3)

And here you have it, the Jedi Masters of the High Counsel…

Frank looks like he’s been gored like Darth Maul at the end of The Phantom Menace. Ok, more like sliced in half, but you get the pun. Six carries for 10 yards. WTF! Is it me or does he run like he’s 41 years old. When 900 years old you reach, look as good, you will not. Hmmm. Dishonorable Mention: (Eddie Lacy 7.7)

The Stats Machine agrees with R2D2, this was a terrible game by Brandon Marshall. I get that he was hurt, but come on man. One reception for 6 yards is about as bad as it gets. Darth Marshall do not. Dishonorable Mention: (Keenan Allen 10.25)

Coming in with a whopping 2 more yards than Marshall, Antonio Gates’ owners would have been better off if he had stayed home and watched Star Wars so he could have been benched. I hope he had himself started in whatever fantasy league he is in. I find your lack of receptions is disturbing. Dishonorable Mention: (Zach Ertz 6.4)

And if you’d like, examine the midichlorian counts yourself… (Downloadable Excel)

Use the Forsett Luke. And may the Forte be with you…