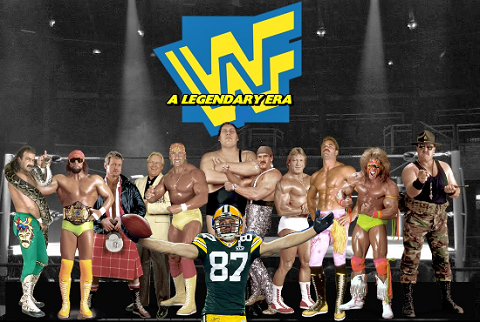 In the 1980s, Hulkamania was running wild in almost every household in America. Even today, nearly 30 years later, when my iPod shuffles to “Real American“, I get transported back to the days when I believed in “The Immortal” Hulk Hogan. I am far from ashamed to admit that the Hulkster was one of my childhood heroes. Back then, it was practically impossible not to be captivated by the World Wrestling Federation and its cast of real life superhero-like characters. From The Ultimate Warrior to King Kong Bundy. From Junkyard Dog to Brutus “The Barber” Beefcake. And from Randy “Macho Man” Savage to Rowdy Roddy Piper. The list could go on and on. [Jay’s Note: Uhhhh, no mention of The Nature Boy Ric Flair? Tsk tsk…] Vince McMahon had built an empire that would entertain millions worldwide for decades to come.

Wrestlemania 3 is best known for Hulk Hogan’s monumental body slam of Andre The Giant. I remember watching it live and being wrapped up in the epic moment. Gorilla Monsoon, Jesse “The Body” Ventura and the rest of the WWE fans were in awe. Hulkamania had reached its pinnacle.

The magnitude of the Hogan-Andre match overshadowed another lesser known rivalry in the WWF between Billy Jack Haynes and Hercules Hernandez that was supposed to be settled in the Pontiac Silverdome at Wrestlemania 3 on March 29, 1987, in a battle known as the “Full Nelson Challenge”. The feud began when Bobby “The Brain” Heenan, Hercules’ manager, provoked Haynes by telling him that Hercules was the real master of the full nelson, the hold Haynes had fancied as his finished maneuver. In an altercation on an episode of Superstars of Wrestling, Hercules clotheslined Haynes allowing him to slap on the full nelson, maintaining the hold until Billy Jack passed out. When the two met at Wrestlemania in front of 93,173 fans the match unenthusiastically ended in a dual count out as Billy Jack Haynes had applied the full nelson outside the ring and refused to let go. Heenan eventually interfered, breaking the hold, enabling Hercules to hit Haynes in the head with his steel chain wrapped around his fist causing Haynes to require 30 somewhat stitches, leaving the battle of the full nelson unresolved.

Or so wrestling fans believed. Fast forward to 2014, and Jordy Nelson has unanimously emerged as the Full Nelson King. As I write this, he just caught another touchdown pass for 66 yards to put the Packers up 14-0. We’ll get back to Nelson in a moment, in the meantime, let’s take a look at some of the other stars of last week according to the Stats Machine.

This is Forsett’s second time receiving this award in just 4 weeks, having won it back in week 1. With Ray Rice out of the picture in Baltimore, Forsett has put up 4 consecutive double digit fantasy point weeks in PPR leagues. Last week he rushed for 66 yards and a touchdown, and caught 3 passes for another 31 yards. I’ll take that kind of production from my flex spot any day of the week. Unfortunately I didn’t make much of a push to grab Forsett when he was the popular add, so for now I’ll just have to enjoy him from the sidelines. Honorable Mention: (Darren McFadden 19.2)

How in the world did a New England Patriot make it to the list this week? Did anyone see that sh!t show on Monday night. The Stats Machine does not penalize a player just because the rest of his team sh!t the bed. While there might not be an “i” in team, there’s definitely one in Sports Machine. In a game where the Patriots had little to be proud of, LaFell had 6 receptions on 10 targets for 119 yards and a touchdown. Quite the day for Brandon. Too bad it was overshadowed by the rest of the teams’ abysmal performance and Jamaal Charles‘ 3 touchdown effort. This was the second week in a row that LaFell was moderately involved in the Patriots passing game making 4 catches on 8 targets for 46 yards the week before after being a complete non-factor the first two weeks. I am interested to see how Brandon’s role plays out as Brady has really only been able to rely upon Julian Edelman up to this point. Gronk is getting healthier so it will be interesting to see how the LaFell experiment plays out. Honorable Mention: (Eddie Royal 26.9)

With Marcedes Lewis out with an injury, the Jaguars have turned to Clay Harbor, who has been sidelined with a calf injury since July, at tight end. Clay was a touchdown short of a perfect day catching 8 of 8 targets for 69 yards. Maybe it’s just me, but if I threw the ball to someone and they caught it 100% of the time, I’d keep throwing it that way. The Jaguars are a bad team and I have very little desire to own any of them, but if the matchup makes sense and you are in need on a bye week, look him up. At a minimum maybe Wheel of Fortune can do an NFL tight end before and after puzzle. Charles Clay Harbor. Honorable Mention (Dwayne Allen 15.2)

The “Mouth of the South” Jimmy Hart is screaming into his megaphone telling you to grab some of these guys if you still can.

These are the top performing players based on last week’s stats regardless of percentage owned.

Less than a month ago Asiata was a nobody, sitting behind a guy in the depth charts that was one of the most popular studs in fantasy football. Little did many of us know that that same player was a child abuser. Perhaps he should have picked on someone his own size such as Bret “The Hitman” Hart or Mr Wonderful Paul Orndorff. But enough of him. Look I never even said his name. Asiata carried the ball 20 times for 78 yards and found the end zone a whopping 3 times! He added 3 catches for another 22 yards on top of his already great day. According to the Stats Machine Asiata is the 8th best running back so far and even though he has teammate Jerick McKinnon nipping at his heels, he is a must own. But I’m sure everyone already knew that. Honorable Mention: (Jamaal Charles 31.2)

It should have been Jordy Nelson that ended the Undertaker’s 21 match win streak at Wrestlemania. He should have administered a full nelson while in a steel cage until the Undertaker passed out. Then he should have climbed to the top, caught a bunch of footballs thrown to him from the fans and climbed down to victory. If Vince is reading this all I ask is for a front row seat if you decide to run with this idea is some way. This is Jordy’s second time being honored by the Stats Machine in just 4 short weeks. Ten catches on 12 targets for 108 yards and 2 touchdowns will do that for you. There really isn’t much I can say about him that hasn’t already been said. Jordy Nelson is a “Big John” stud. Honorable Mention: (Steve Smith Sr 33.1)

Our little baby’s all growns up. Just a few weeks ago Donnell was identified by the Stats Machine as the top tight end owned in about 70% or less leagues and this week he’s the top tight end in all of football. Scoring 3 touchdowns will do that. Seven receptions for 54 yards and 3 TDs for LD. And by LD I mean Larry Donnell, not Larry David. Larry David has long balls and Larry Donnell catches short balls, for touchdowns. I don’t care if you’ve never heard of him before week 1, Donnell is now a must own. Honorable Mention: (Heath Miller 30.3)

Your heavyweight champions! Love seeing Forte at the top of the list despite having not scored a touchdown yet. Larry Donnell continues to make a name for himself this season.

I actually called this disaster in my Start’em, Sit’em column last week suggesting that owners sit McCoy. I’m sure 0 percent of my 15 readers listened to that advice. Ten carries for 17 yards. 17 yards? Jimmy “Superfly” Snuka has jumped from heights greater than that! The bottom line is that LeSean McCoy is not really this bad. He’s had a rough start to the season, but he’s got to bounce back. Right? I highlighted him in my “On Pace” post as a player to buy low on. In the meantime, hang in there McCoy owners.

Looks like Megatron was kept under wraps by Optimus Prime last week. Two catches for 12 yards. Those are the kind of numbers you expect from him in the first drive. If anyone deserves to be cut a break and most likely to end up as next week’s top receiver, it’s Calvin Johnson. Dishonorable Mention: (Pierre Garcon 9.95)

Two catches for 8 yards. Hunk a hunk of Vernon junk!

I leave you all with this bit of advice. Train, say your prayers and eat your vitamins. Whatcha gonna do Razzball maniacs, when the Stats Machine… runs wild… on YOU!!!

Feel free to examine the stats yourself (Excel Spreadsheet).