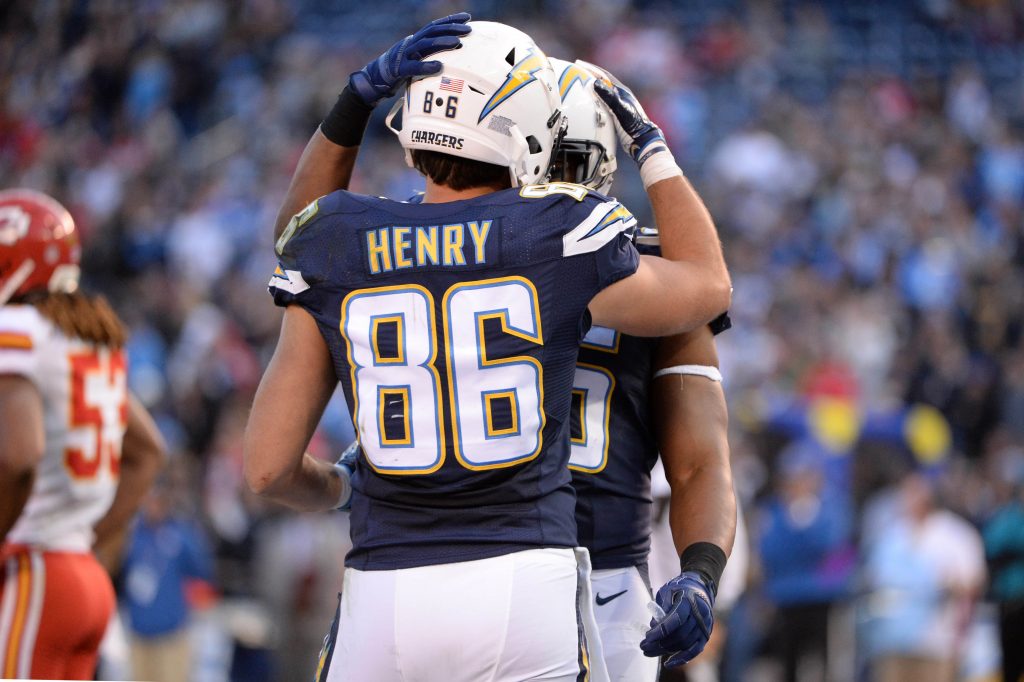 Well, it’s not even June, and we’re already losing some big-name fantasy players to the injury bug.

In the first day of their OTA’s, the Los Angeles Chargers have lost their 3rd-year Tight End to a torn ACL for the entirety of the 2018 season. Obviously, aside from fantasy, it sucks to see such a young, promising football player have to suffer a season-ending injury, and it is such a huge blow to the Chargers. However, this is a fantasy website, so let’s figure out what this will mean for the other Chargers, and other Tight Ends, come draft time in late August.

What This Means for Los Angeles

Obviously, this is a huge blow for the Chargers offense. Out of the 4,000 yards and 28 TD’s thrown by Philip Rivers in 2017, 579 yards and 4 TD’s were caught by Henry on 62 targets. However, with his absence for the upcoming year, his target share and workload will be up for grabs among the remaining Chargers receivers

Because of Henry’s absence, none of the Chargers wideouts will suffer. Everyone gets a boost in potential fantasy production. But out of all the names, I can only envision Keenan Allen and Tyrell Williams being the only fantasy-relevant options because of this. While I do want to like Mike Williams, I don’t see myself drafting him unless I’m playing in a deeper league. And there is time for some hype to build around his name in the coming months, but I need to see some production on the field before I buy in. Same thing for Virgil Green, who I want to classify as a nice sleeper TE option, but I think there are just other options I would rather have. However, as I’ll explain below, the position has seen some greener pastures in recent years, and I wouldn’t put it past myself  to snag Virgil Green in the last few rounds if I can’t get some of the studs up top.

All-in-all, Keenan Allen and Tyrell Williams should both see a bump up in their current ADP (2.08 for Keenan Allen, nothing yet for Allen) and expected fantasy production. And, until my opinion changes, I don’t think we should change our opinions on Rivers or Melvin Gordon.

What This Means For Other Tight Ends

To echo what my good friend Viz Tyskie said in the Razzball group chat, (subscribe now for $4.5M!), there are only about five to six Tight Ends that I feel really good about heading into this season, and they are: Gronk, Kelce, Ertz, Engram, Graham, and Rudolph. The rest of the options either carry some significant risk that I will further evaluate, or too much risk that I will stay away.

So what does this mean? Well first off, expect to draft your Tight End within the first 5 rounds, as Rudolph is the only TE whose ADP is after the 57th overall pick. Second, if you don’t get one of these TE’s, personally, I think you should punt the position to the later rounds of the draft. Guys like Tyler Eifert, Trey Burton, David Njoku, O.J. Howard, and George Kittle are all decent late-round picks that you can get buy on for the first few weeks, unless one of them completely shreds it.

Tight End is very top-heavy this year, especially with Henry’s injury, so make sure you are prepared come draft day.

But hey, we’ve got a few more months left. And everyone here at Razzball will make sure you’re more than prepared. So stay tuned for an awesome summer!

@MB: Matt I’m the Jewish one

@MB: Matt I’m the Jewish one

Rivers needs Gates back. He’ll never be comfortable in the red zone this season without a TE he trusts

@Nick: While I sort of agree with you about the trust factor, I don’t think Gates is the only answer. He hasn’t been consistently producing in a while. I think as soon as he finds any target he can trust, he’ll be comfortable

Howdy! Gearing up for the fantasy football 2018 season , we have a keeper league & we can keep max 2 players. Keeper settings we don’t go by round said player was drafted it goes by rounds 1 & 2 are dedicated for keeper selections & snake style begins round 3.

That being said here are options on my team who are keeper worthy; I have a bunch it’s a tough choice!

Here are options I was thinking:

@water boy: Hey water boy! I think the best option is DJ and Keenan Allen. Both are excellent studs this year, while you can replace the other big names in the draft, especially Watson, as QB is a really deep position this year (like every year)

Thanks man! I like that so then I have a stud WR & stud RB to start the draft! Forgot to mention it’s .5 ppr

@water boy: Even better! No problem homie, thanks for reading and leaving a comment!